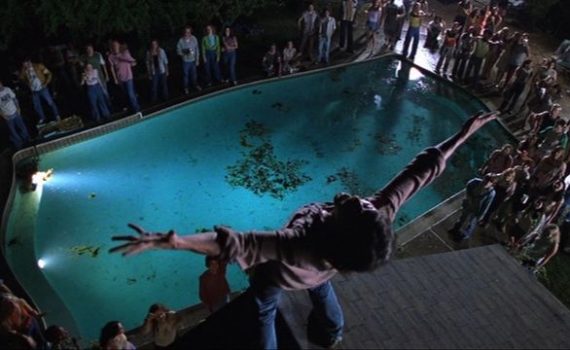 Chalk up Almost Famous as one of those impactful movies that you watch when you’re 17 and it blows your mind, but might not be that wonderful under harsh light and a microscope.  Does it matter?  Did it affect you and you loved it and so it’ll live happily forever in your mind despite its flaws?  Probably, if you’re anything like me, hopelessly nostalgic, that’s how you’ll view it, as a movie that mattered deeply and so can’t really be tarnished by time.  Rewatching it after a few years, sure it has issues, and sure the acting isn’t perfect, but most of me doesn’t care.  Almost Famous still seems magical, because it was, and it doesn’t much matter if the sparkle has worn off; we who adored it, and remember it now, will never be the same.

In the 70s, Rock&Roll was already dying, as the industry spit out the aging stars and the cookie-cutter bands starting churning out the mediocre hits.  But that didn’t matter to William Miller, a boy who was never allowed to listen to Rock as a child; when he grew old enough he knew exactly what he wanted to do with his life, and that was to write about music.  Although he was only 15, his chance came when Rolling Stone read some of his work, and when he stumbled upon the up-and-coming group Stillwater.  Tasked with going on the road with the band and writing their story for the magazine, William instead fell in love with the art of making music, with the people who brought it to life, and with the chaotic world of Rock.

Almost Famous really is one of those films that impacts the young audience, but doesn’t age so gracefully.  Unlike Crowe’s first hit, Say Anything, which only improves like a fine wine, this film lacks the punch if you are no longer young and impressionable; it requires that amount of malleable heart.  But hey, our hearts used to be that squishy before we hardened them, we can still remember those days, so a movie that we loved then can still remind us of our openness then, if, by now, we can recognize more flaws.  Because there are problems, mainly with the acting, because, really, most of these actors aren’t very good: Fugit, Hudson, Crudup, Jason Lee, Zooey Deschanel, Michael Angarano, Anna Paquin, Noah Taylor, Jimmy Fallon, Bijou Phillips, Rainn Wilson, Jay Baruchel, Nick Swardson.  The exceptions are Frances McDormand and Philip Seymour Hoffman, masters both, and they are perfect, but maybe not enough to fill in all the gaps.  But it’s a time capsule with a great soundtrack and an honest feel, with lines you will remember forever, and an every-band quality, like That Thing You Do, which helps us understand that this isn’t the story of one group but every group, not one fan but every fan.  Again, don’t judge it too harshly; you were sappy once.