Movie Review – The World to Come 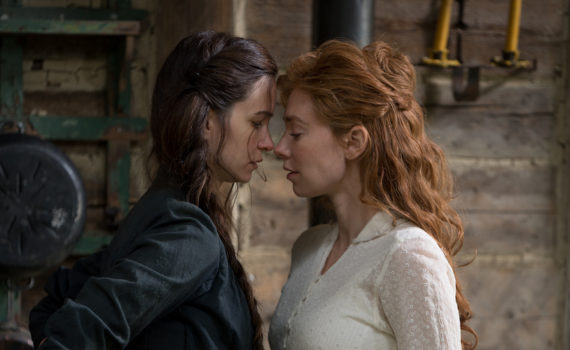 Movie Review – The World to Come

I will not be the first or the thousandth critic to mention this, but it bears repeating; women are gay and continue to be gay in times other than the recent European-American past.  Hollywood must think that it stumbled upon some sort of secret, that women used to like each other some times, but only white women, only in big dresses, and only tragically.  Again, I am in no way the first person to see this trend, but we have got to move away from Ammonite, Portrait of a Lady on Fire, The World to Come, films that show “birdcage” wives & daughters touching fingers and accidentally discovering that they are lesbians.  It’s weird and it needs to stop, or at least expand, because I think audiences are ready to accept that gay ladies might be among us …*looks around* …right now!

In New York in 1856, farming couples attempt to start families, raise children, grow crops, tend livestock, and survive the best they can, through harsh winters and chaotic circumstances.  Abigail & Dyer recently lost their only child, and Abigail finds it hard to move on, to try again.  But she finds a friend in another childless woman, Tallie, who is outspoken, bold, beautiful, and comes to visit often.  The two begin a romance when they discover that their affection for each other goes beyond companionship, but Tallie’s husband is suspicious and violent, making the secret affair dangerous, but never not worth it.

Disobedience comes to mind as a movie that did it better, but even being able to catalog which movies are the same and did it better/worse is a problem.  And I understand that it doesn’t change over night, that it is also partly my problem, grouping by orientation, that’s a me-issue, but come on filmmakers, we don’t need a period piece to accept that women might be into women, we can hear that tale in other ways.  Really, it’s also just simply bad storytelling, giving us that same arc over & over again; we don’t need more depictions of dissatisfied wives in big dresses finding each other and being really sad about it.  The tragedy is also a problem, which is why something like Love, Simon was a big deal; it took a very normal recipe and made a gay guy the main character, which shouldn’t have been an “aha!” moment but was.  Otherwise & also; this movie isn’t even that good.  It’s dull, it turns bizarre, the music royally sucks, and I was bored for the vast majority, though the acting was actually pretty good.  But the direction & writing weren’t, we demand better, so please give it to us.