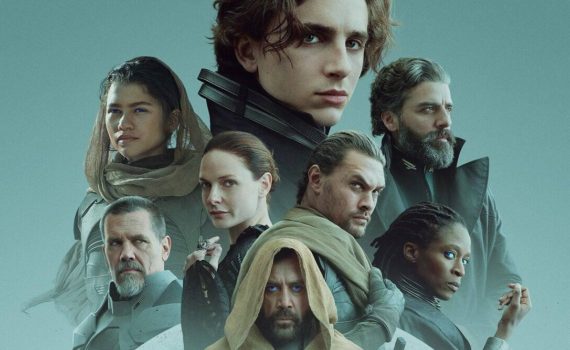 Dune is the largest cinematic spectacle we’ve seen since COVID; thank god it’s good.  Not only did we need this larger-than-life event, but the book needed this retry as well, another attempt at telling something so grand it’s almost untellable; almost.  If anyone could do it, that director would be Villeneuve, we’re just lucky it was him: Prisoners, Enemy, Sicario, Arrival, Blade Runner 2049.  Add Dune to that amazing list as another volume in the library of that stellar filmography, and watch with an abandon that only the very best filmmakers deserve.  This film is everything we could hope it would be, and what”s best; it’s just the beginning.

Based on the classic, trend-setting series of the same name, Dune is the story of the rise of Paul Atreides, son of Duke Leto Atreides and the Lady Jessica, heir to House Atreides and the power of its home planet.  The known universe is ruled by a great Emperor, who pits House against House so that none grow powerful enough to threaten his control of the stars.  Central to this struggle is Arrakis, known as Dune, a desert planet where can be harvested melange, or spice, the ingredient needed for space travel, long life, and supreme mental power.  House Atreides has recently been given dominion over Arrakis, ousting the brutal House Harkonnen, and creating a war between them.  When Paul begins having visions, he comes to understand that his fate is entwined with that of the people of the desert, their religious beliefs, and their military strength.  Only in joining them can he become truly strong, and only in accepting his destiny can be become truly great. Dune is huge.  I mean, the premise couldn’t be bigger; whole humanoid species travel throughout space, one Emperor rules everything, Houses take control of entire planets, their wars encompass solar systems.  It’s an epic adventure of the largest scale, and this is only the beginning, Paul coming into his own, this is just his origin story in a way; we haven’t even scratched the surface of what’s to come.  In that vein, think of this as a two-and-a-half hour set up to what could potentially be the greatest film franchise of all time, better than Lord of the Rings or Alien or even …dare I? …Star Wars.  We’re talking potential here, people, potential to be awesome, something that, with this director and this cast, could actually come to fruition.  Planets, armies, time, space; there are no limits, and if this is just the beginning, we have a lot to look forward to.

Part Two is on it’s way in two years, that’ll be fun, but meanwhile I guess we just have Part One, no need to look too far ahead, and no problem either, since the film is perfectly fine on its own without the help of its progeny.  It’s a movie made for any audience, since it has the action and the metaphor, the danger and the depth, something for everyone, no matter what you’re looking for.  It’s big, but it’s also small at the same time, telling the story of a boy, that’s it, while also telling the story of the whole galaxy.  The advanced tech is cool, the ancient brutality is vicious, the tribes are incredible, and I could spend all day looking up backstory info, because there’s just so much.  And, you know, this may be the best cast in history: Timothee Chalamet, Rebecca Ferguson, Jason Momoa, Oscar Isaac, Stellan Skarsgard, Dave Bautista, Josh Brolin, Stephen McKinley Henderson, Javier Bardem, Zendaya, Charlotte Rampling, Sharon Duncan-Brewster.  It’s as boundless as Star Wars, as pivotal as Wheel of Time, as magical as we could wish for, and comes just at the right moment.  Dune is a success from any angle, and could possible get so much better.