Movie Review – The Harder They Fall 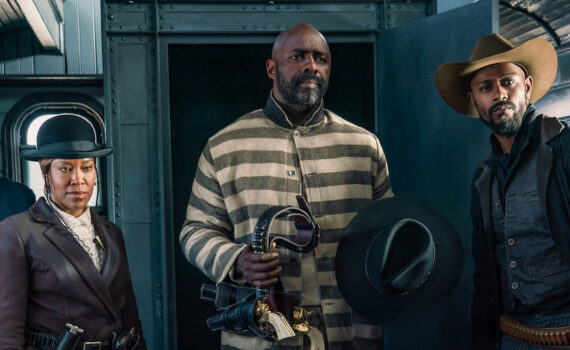 Movie Review – The Harder They Fall

Jeymes Samuel’s first feature film is, not surprisingly, not that great; the fact that, whatever talent he has, has been forced into this big a spotlight this soon is worse.  Netflix originals, and all modern streaming films, have that to their discredit; they allow directors who aren’t ready to be on the big stage to showcase ideas that aren’t ready to be born yet.  The result is bad media that, the more we get, the more we convince ourselves is fine media, bringing down our taste levels and breeding more trivium.  Chances to artistic people; good.  Billing those chances as blockbusters; bad.  The Harder they Fall is an interesting take on the Western genre, an inclusive skew that could be fun, but has been bloated into an Oscar-contender because a DVD service wanted it to be, not because it had that potential.

On the lawless plains, no one has time to mourn over your corpse, because there will be fresh graves to dig tomorrow, and most of those thrown down six feet deserve the deaths that found them so young.  Gangs rule the towns, gang bosses kill at will, and your soul is the cost of surviving, at least until tomorrow.  Rufus Buck was once the leader of them all, the most feared outlaw alive, but he finally fell to the law, and now rots in jail.  A boy he once spared, Nat Love, has a gang of his own now, and uses them to hunt down those who worked with Buck to kill his family, all those years ago.  Now, Rufus is sprung, Nat is on the trail, and two rival bands face off in a shoot out that will decide the fate of a town, a time, and the wild, wild West.

To touch on it once more before moving on, I like that Netflix and others give amateurs a chance to reach real audiences; that’s commendable.  But those amateurs are giving us crap, obviously, because they’re new, but we’re starting to not be able to tell fool’s gold from real metal.  Our taste is being dumbed down, by these films and these series, and I think that has a terrible long-term effect.  Now, that doesn’t mean that The Harder they Fall is abysmal, it just means it wasn’t ready, and it’s in no way a high-quality feature.  Its style is …weird.  It’s like Spike Lee meets Quentin Tarantino meets 300 meets Coffy.  It’s way too much a “nod” to Lee, it takes violence to the max, it’s almost comic book-y, and it definitely brings Blacksplotation to bear, which might be laudable but still feels off.  This film is too much, and also too much to handle, zipping around into different genres and realms and musicals until audiences are dizzy.  The all-Black cast is impressive, but comes across as a forced point, rather than an inclusive decision, which does no one a service.  Oh, and Regina King’s accent is an embarrassment to remember, a Razzie waiting for its acknowledgement.  This film is for too many failures and nods, and far too few triumphs; not awful for a first try, but that’s not how it was billed, so that is not how it will be judged.