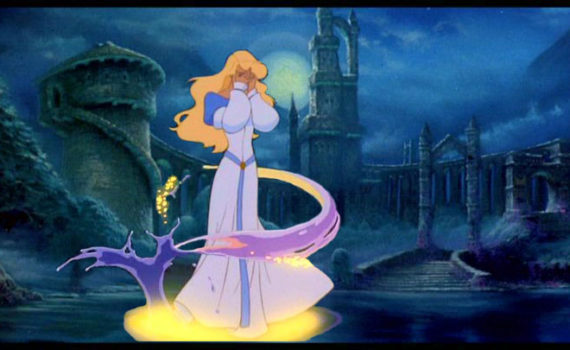 In the 90s, my dad, who is a career salesman, worked for Nest Family Entertainment, selling and advertising their series of animated bible stories and also their collection of animated American hero tales.  He would travel to trade shows and expos, play the movies on TV stands, and try to sell sets to churches, schools, families, what have you.  Nest was owned by Richard Rich, a former director for Disney, who followed others like Don Bluth in creating his own animation studio when Disney started going south in the early 90s, before their Renaissance.  Nest would produce, along with Pillsbury and Turner Hone Entertainment, their first feature in 1994, and that film was The Swan Princess.  That’s how I first watched it, I always felt a special connection to it, and now I’ve passed that relationship on to my own kids, who understand that it’s no Little Mermaid, but that it’s also worth seeing.

Heirs to neighboring kingdoms, Odette and Derek were destined to be wedded.  Their parents planned it from the moment the little boy met the baby girl, it just made too much sense not to agree to, the two nations becoming one, united forever by the bond of love.  One small problem though; Derek and Odette hated each other.  They were forced to spend the summers together, forced to fall for one another, but that only drove them further apart, until the year they both grew up, saw each other properly, and finally felt a real connection.  But just as all the pieces seemed to be falling into place, the evil Rothbart attacked, killing the King and taking Odette as a prisoner.  He turned her into a swan with his dark magic, and with an eye toward obtaining her kingdom, but Derek vowed to find her some day, if he had to spend his whole life searching for the girl he grew to love.

The story is based on Swan Lake, with some clever Disney-style plot lines thrown in for originality, and the entire thing feels like a real, old-fashioned tale, not some second-rate animated clunker.  Very few saw this film, but it’s better than some Disney flops, and at least holds its own with some of the Disney Princess musicals.  Speaking of the music, that might be the best part, with memorable songs that are stronger than you’d think: This is My Idea, Practice Practice Practice, Far Longer than Forever (the big number), No Fear.  A couple of the songs are dumb, but most are solid, and the overall score is pretty great too.  The voice talent is a roller coaster, mostly filled with no-names, but with a few celebrity cameos: Jack Palance, John Cleese, Steven Wright, Sandy Duncan.  The animation is on par with others from the 90s, the climaxes are intense, the animals are fun, there’s humor blended with fantasy, it’s quite a nice little package, and it’s too bad it didn’t get more attention, because it’s worth your notice.