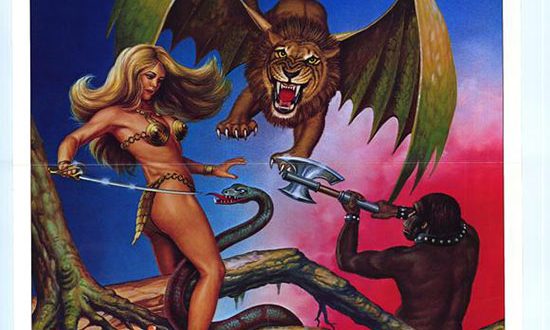 There’s fun-bad and then there’s plain-bad, and Sorceress is so far gone into the dark pit that is the latter category that it almost ceases to be a movie anymore, becoming pure torture instead.  I know I’ve said before that we want a little silly from our 80s fantasy, that we want a little wrong and messy and goofy and fun, but that can be taken too far, and this film can be taken as an example.  Everything that something like Beastmaster or Conan or Red Sonja does right, Sorceress does wrong, showing that you really do need a little talent to pull off a b-movie, that you can’t just shovel ideas into a hopper and hope sparks catch.  This is a cool idea gone wrong if ever there was one, and you should stay far, far away.

Twins Mira and Mara don’t know who their parents are and don’t even know that they are girls; they’ve been supremely sheltered all their lives in order to keep them safe.  Their mother was killed by their father when he attempted to learn which of the twins was first born so he could sacrifice her, and they’ve been living in secret ever since.  Now he’s back and wants to gain ultimate power through dark magic, so he’ll need his daughters again, which the light side can’t let happen, or all will fall evil’s way.  The girls team up with an unlikely band of misfits, but a group who are true and brave, and who vow to keep them safe no matter the cost.

I’m a fan of the silly 80s fantasy genre, but this is going too far.  You have to see it to believe it; the voices that seem like dubbing, the acting that’s as good as a middle school play, the story that must have been made up one night when everyone involved was high as a kite.  It’s a movie that makes absolutely no sense and is so stupid you feel insulted that it actually exists.  And what’s more, it’s really sexual, but like a soft core porn that wasn’t even brave enough to go far enough to get on Cinemax.  I guess that should have been entertaining, but it wasn’t, it was just creepy, because you get the sense that no one knows how far they’re supposed to be going, what buttons they’re supposed to be pressing.  It’s a disaster from beginning to end, stocked with the pieces that we think we would want, but delivered in such a way that all of them feel kinda funky and basically gross.