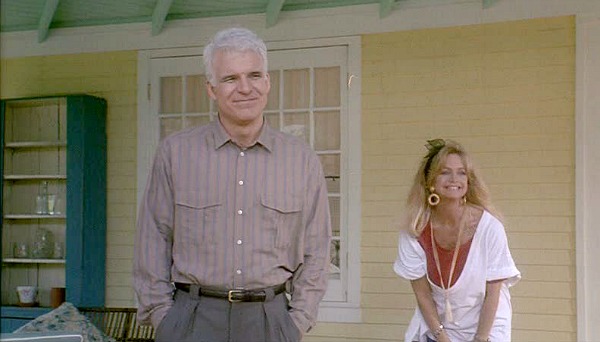 Housesitter is basically What About Bob 2, but how could that possibly be a bad thing?  What About Bob is one of the (if not the) greatest comedies of all time, so bringing that style back to the big screen is a smart idea no matter how you slice it, as long as you have the cast and the idea to cover your butt.  Frank Oz, almost the exact same music, a big New England house with a round drive, a small town, a kooky catastrophe; the similarities are pretty striking when you watch them unfold, but, again, that’s not a bad thing really, since they didn’t try to make a sequel (which would have failed), they just took the concept and rewrote it, presenting it to us in a different form because they knew we loved it so much the first time around.

Newton Davis is an architect in Boston who recently built a house for a girlfriend, asked her to marry him, and was dumped in turn.  She just wasn’t ready, he’s too much of a nut, but now he doesn’t know what to do; he’s going broke, going nowhere, out of ideas, and slowly spiraling downward.  When he meets the mysterious Gwen, they hit it off right away; she’s smart, funny, weird, a free spirit, and is likely to do anything, including using the information she gets from Davis to go ahead and move into his empty dream home, pretending to be his wife when the townsfolk ask.  It’s a con game that can’t last too long, but when Davis finds out the pair strike a deal; Gwen can keep up the charade if she also helps Davis win back Becky, the girl he can’t forget, the one who broke his heart, but perhaps the woman he’s destined to be with.

If you’re gonna replace Bull Murray and Richard Dreyfuss in an oddball comedy that follows the same path, there probably aren’t two better prospective actors than Goldie Hawn and Steve Martin, geniuses each.  And Hawn really steps up, because she’s not the ditzy blonde this time, she’s the swiftly lying con artist who has everyone right where she wants them, until she starts to fall for Steve Martin, who plays the lovable idiot so very, very well.  The plot is silly, obviously, but man is it funny, with these two leading the charge as the game goes off the deep end and all we can do is watch the main scheme fall apart.  It’s fun, it’s funny, it’s iconic; this movie is simply pure entertainment, from beginning to end.  It’s not quite a perfect performative classic, but it’s a film that holds up all these years later and can definitely highlight a random evening in.