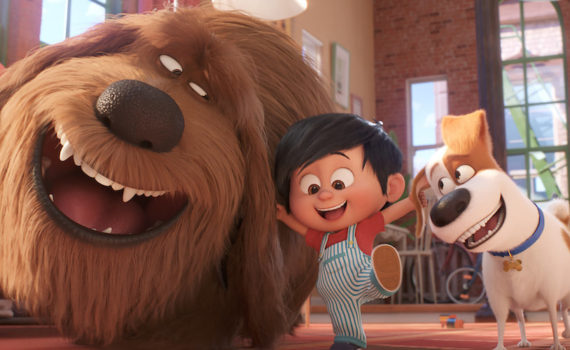 I blame my kids for making me see this movie.  I was planning on ignoring the first one, it was going so well, but then a screener came in the mail for the sequel, and my kids were so excited that I agreed to watch both films with them, which in hindsight was a bad choice.  It’s not that this franchise is terrible or has something wrong with it or shouldn’t be enjoyed by little tikes, it’s just that there’s so much better animation out there, and that’s what we should be exposing our families too, not this run-of-the-mill, small-minded stuff that has little more to offer than solid visuals and kooky characters.  These movies simply aren’t exceptional or worth much of our time, they only exist for quick fun, and while that’s fine, I’m sad that I got sucked into watching it twice.

Max & Duke have become friends, and have settled into their new lives with Katie very well, thank you very much.  But nothing gold can syay, change is inevitable, whatever cliche you want to use; basically, Max better not get too comfortable.  Katie meets a guy, they have a kid, it’s all very weird, until Max begins to understand that now he has a job to do, a child to love & protect, which gives his life new meaning.  A trip to the farm will help him understand this, while his friends back home in the city go on some adventures of their own that will complicate their own lives.  Gidget kinda becomes a cat, Snowball rescues a tiger, it’s all very complicated, but that’s life, it’s messy, and you shouldn’t even try to predict it.

The sequel is a step back from the original, which is to be expected, since the first one wasn’t that good in the first place.  Kids like it though, that’s cool, that’s fine, there was money to be made, so here we go again.  This time the film splits into three different stories, which I didn’t like, since there wasn’t enough talent to go around for one story in the original film.  And there are some new voices added in as well; the nice Oswalt to replace the evil Louis, Harrison Ford as a brave farm dog, Nick Kroll because that weirdo is everywhere, Tiffany Haddish who I literally can’t stand.  The changes were definitely not improvements, and the plot was over-the-top ridiculous too often, making the entire movie a joke.  If your kids want to watch the first, I say let them go for it, but recommend them away from the second; I could feel a few brain cells escaping through my ears in order to save themselves.