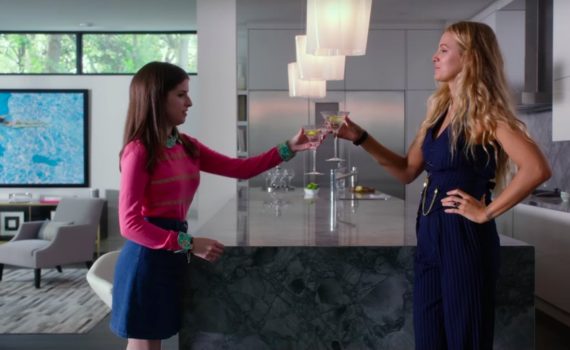 The more I think about it, the closer to The Worst Movie In The World A Simple Favor sidles.  And we should not be surprised; Paul Feig is talentless when it comes to film.  He’s a TV director who has helped craft a few funny moments for The Office, but his films are pure trash: Bridesmaids, The Heat, Spy, Ghostbusters (2016), A Simple Favor (this), Last Christmas (gag).  This is Bottom List stuff, comedy without the comedy, and he thought to try his hand at a murder mystery just for the hell of it?  It’s a wonder anyone in their right mind greenlit this project, even with a trio of young stars on board, because Feig is a proven flop, and I will scream that into the void until proven wrong.  Other than the kinda cool cast, there is nothing to praise this movie for, and the longer you watch it the more you want to go back in time and unwatch it; it’s that insultingly off balance.

Stephanie is a highly-motivated stay-at-home mom who always seems to have the answer, the bakery item, the volunteer sheet, the helium pump.  She also has a mommy vlog with recipes and tips, but what she lacks are real friends, and she’s a widow to boot, so life can get a little lonely.  Until, that is, she meets Emily, who seems to somehow need a friend even though she appears to have everything you could wish for.  Emily is rich, has a high-powered job, a semi-famous husband, great fashion sense, a carefree attitude, a rambunctious son, and the fact that she wants to spend time with Stephanie is frankly amazing.  But it gets strange when she disappears after dropping her kid off with Stephanie, just dropping off the face of the planet.  Where she went and who is in on the crime become questions that Stephanie is dying to answer, even though she quickly becomes too close to the case (and to Emily’s husband).  The events that come next are as random as they are insane, with ups, downs, too many motives, some unknown victims, and so much more than meets the amateur eye.

What’s funny is, at first, I didn’t think A Simple Favor was going to fail, I thought we had something good on our hands, and for the first hour I was hooked.  There was a who-done-it element, the story was strange, the characters were intriguing, Kendrick is so wonderful, Lively & Golding were so handsome, I was in, I was invested, and I was ready to take back all the evil things I had said about Paul Feig.  Then the rest of the movie happened and I was just mad at myself for almost believing.  How many times can one film jump the shark?  I don’t know, but this one must have set some sort of record, because they left no shark unjumped.  Vlogs, twins, tattoos, wires, summer camps, death by Toyota Prius; the final scenes were absolutely hellish.  The story makes no sense when you think back on it, they took a hundred leaps at seemingly random times, and I was left throwing my hands up in dismay and abandon by the end of what was surely the most bizarre two hours I will never get back.