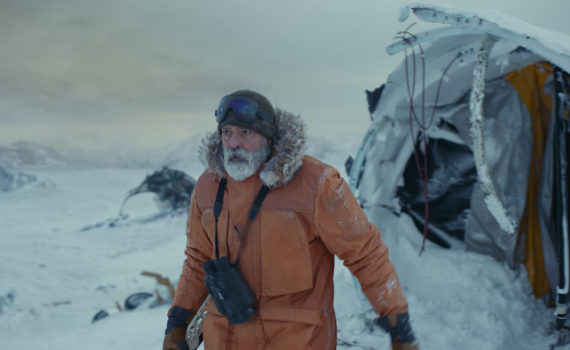 The Midnight Sky is only good if you allow it to be and if you don’t pick it apart too minutely, which may not be high praise but I guess is my way of recommending that you watch this movie only with an eye for your own enjoyment, not for critical awards.  Again, that sounds backhanded, but I only mean it that way a little bit; most of me really liked watching dramatic sci-fi at its simplest, which is exactly what (I think) this film attempts to be.  It’s based on a book that’s probably no good, it doesn’t try to be high-brow, it brings the expectations down a notch, and therefor could succeed with a larger crowd than just end-of-the-year critics.  It’s a Netflix original adventure, after all; how cinematically perfect do we need it to be?

An unspecified global Event has destroyed life on our planet, and that’s basically the end of all things.  The air is compromised, creatures are dying off quickly, the disaster is reaching even the far poles, and that’s all she wrote, other than a slim hope on a distant world.  A team of scientists was recently dispatched to a moon that could house human life, and they’re actually on their way back, but to a world that completely changed while they were away.  One lone expert, still monitoring space crafts and holding out hope that he can survive the Event a little longer, tries to reach the returning rocket and warn them away, before they come back to death, when life might be waiting for them somewhere else.

Back to my point about this being a movie for the masses; sometimes you just have to let yourself be entertained by a film that’s not exactly perfect.  Like The Martian; take a hit novel, add in some Hollywood magic, create a story people can enjoy, and no it’s not 2001: A Space Odyssey, or even Interstellar, but it’s interesting, it’s consumable, and it’s worthwhile, if at the same time not vaulting to the forefront for Best Picture.  Clooney is solid, his tale is nice, the space crew dynamic is good, the acting there is OK; if these sound like lukewarm sentiments I guess that fits in with my general outlook here.  The problems come with the tropes, because my god are things predictable and usual and expected.  Again, that’s not a terrible thing, some audiences will find the movie comfortable exactly because of those normal progressions, and that’s fine, but it might simply keep Midnight Sky from being a great motion picture, it might just have to settle for “I watched that on Netflix and I liked it”, the end.