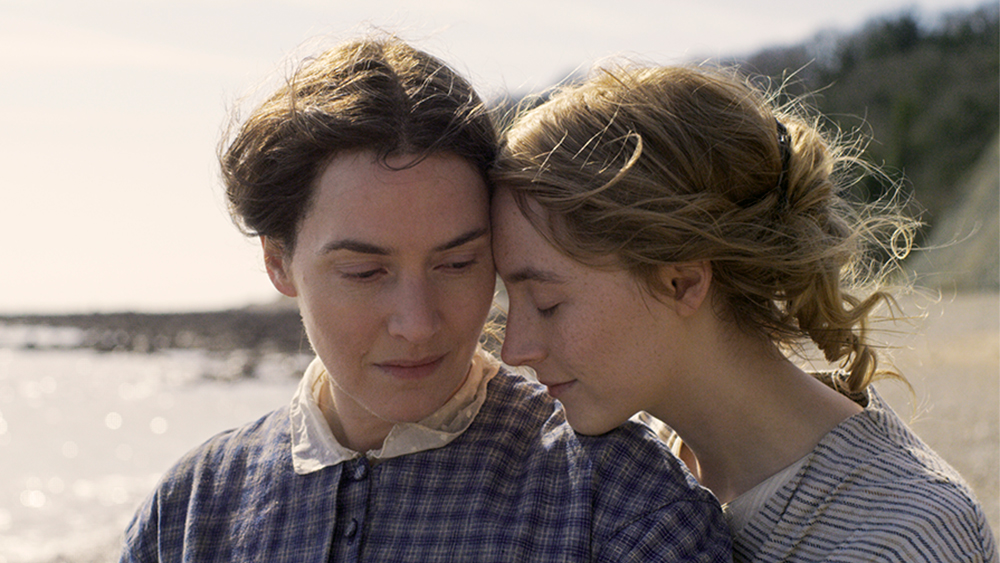 Ammonite is Portrait of a Lady on Fire for people who prefer the physical to the visual.  Where Portrait was beautiful to look at but lacking reality, until you began to fall asleep out of sheer boredom, Ammonite is rather ugly and dull, but makes up for its lack of stunning features with its focus on the mundane, the dirty, the noisy, the shuffling, the coarse, and ultimately the loveliness that can be found among those things.  Perhaps comparing the two films is rather trite, since they are both lesbian period romance, perhaps that’s not fair and simply puts each in the same pigeon hole.  There’s something to be said about Hollywood’s weird reliance on history to tell gay stories, but that’s not a problem I can solve, so I’ll simply move on and say that Ammonite is the better movie because it has the better style, the better actors, and the better result.

In Lyme, England in the 1840s, Mary Anning hunts for rocks along the coast, as she keeps up a small fossil shop in her village, selling larger pieces to museums, and garnering some little fame among a certain circle of scientists.  She’s a lonely woman, lives with her mother, never married, and has little time for others, keeping to her shoreline and her work.  One morning, into the shop pop Mr. & Mrs. Roderick & Charlotte Murchison, a young couple visiting the area.  He is an admirer of Anning’s work, she is suffering from “slight melancholia” and was prescribed the sea air.  Soon, Charlotte becomes a strange house guest of Mary’s, and suffers a high fever.  As the pair begin to get to know one another, they feel a wonderful attraction that denies all the artificial societal rules of the time, and brings them both to life in a way that neither had yet been before.

This is a film more for the senses, whereas the other film I was talking about, if you didn’t watch it, was more for those looking for a living piece of art that they could enjoy for an extended period of time.  I found that one boring, I wanted a break, or maybe just something more, and Ammonite delivered just that; another reason to watch other than cinematography.  Actually, there wasn’t much beauty in this movie, but it did play upon our senses, with sound after sound that exhibited what it would be like to be living in that moment, with an oppressive mood that filled us with a rare sadness that we couldn’t explain.  The story was simple, the delivery simple as well, but I liked the style that was laid out, so well done Francis Lee, with his second ever feature film.  Also, well done Kate Winslet, who was excellent, per usual, and very reserved in an unusual way that was fun to watch.  Saoirse Ronan was a bit weak perhaps, or maybe only compared to Winslet; I often felt that she was acting, where Winslet simply looked like she lived and worked at the shop, like nothing was fictionalized at all.  Ammonite moves slowly, is heavy with emotion, and doesn’t boast any complications, but somewhere within it is an honestly and a simplicity that I rather liked and could use more of more often.