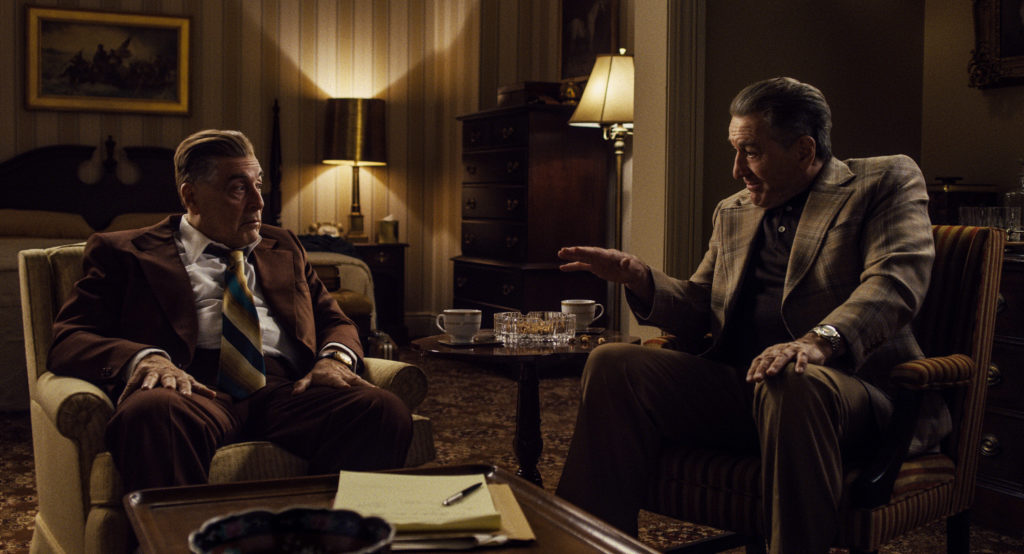 The first hour of The Irishman is basically bad, if that’s not so sacrilegious to say that the cinema gods will strike me down on the spot.  What’s more, that cowering opinion isn’t too radical, it seems to be a consensus among those who know film, which means you have to assume that even Scorsese knows that the first part of his 3 & 1/2 hour mobster epic is no good, which prompts you to wonder, why wasn’t it fixed?  It’s Scorsese, it’s an Oscar-contender, it’s the most hyped audiences have ever been over a Netflix original, it’s a feature that we will all remember.  So why isn’t it more perfect?  The only explanation I can think of is that Marty put us exactly where he wanted us at the beginning, knocked himself down a peg, and then started rebuilding for the rest of the film.  He had plenty of time to do it, he pulled it off, by the end of movie you’ll feel completely stunned, but I’ll always be nagged by the fact that The Irishman has obvious problems, and I’ll always wonder why they weren’t addressed.

Frank Sheeran used to deliver meat, but now he paints houses, and while the first job is exactly what it sounds like, the second is a euphemism in the mafia world; Frank is a hit man.  He works for Russell Bufalino, who heads an important crime family in Philadelphia, and is one of the few non-Italians that Russell trusts, Frank’s Irish blood not being held against him on account of his steadfast loyalty and willingness to kill anyone anytime anywhere.  He rises quickly in the underworld, and is soon a personal associate to Jimmy Hoffa, the well-connected president of the Teamsters union.  Jimmy loans money to mobsters from the union’s pension fund, which is how Las Vegas was funded and built, so he’s an important man with fingers in many illegal pies.  Frank is his right hand man, but he’s also indebted to Russell, and when the two interests collide, he will have to choose between friendship and business.

Back to the first part of the film, which, again, isn’t just my random feeling, it’s a generally accepted fact; the beginning is no good.  It’s slow, there are so many characters, it feels transient, and the de-aging technology they use on the actors is incredible off-putting.  It doesn’t exactly look awful, it just freezes the faces so no emotion comes across, and that’s a big problem.  When we get over that hurdle, when the story moves on, the movie becomes one of the best that Scorsese has ever created, and that’s saying something.  Maybe he did it on purpose, maybe it was just business he had to get through to get us ready for what was coming next, I don’t know, but I guess it doesn’t matter, because the result, taken as a whole, was special.  The Irishman is bitter, it’s melancholy, it’s reflective, and it’s also pure mafia violence, mixed together in such a way that the humor and despair become one single tidal wave that audiences have no choice but to sit back and absorb.  The cast is great: De Niro, Pacino, Pesci, Harvey Keitel, Ray Romano, Bobby Cannavale, Jesse Plemons.  Two additional shout outs: one to Stephen Graham who was exceptional, and one to Anna Paquin, who was abysmal.  She might have been as bad as the anti-wrinkle technology, which is saying something, but happily those hiccups were in the minority.  The rest of the film was awesome, literally, and ended so smoothly, which shows the talent of its creator.  The Irishman will be nominated for Best Picture and it will deserve it, and Netflix can hold its head high knowing they were along for this wonderful ride.