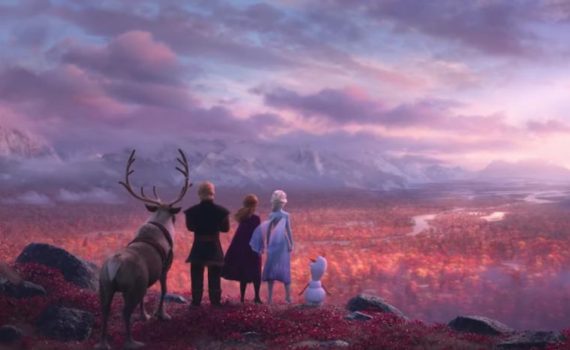 For the record, I was wrong about Frozen.  First, I was wrong about it being a flash in the pan; I thought it was much too Glee and not enough Brave, that it wouldn’t be more than a temporary pop sensation, never becoming a long-standing Disney Princess flick like Tangled or Princess and the Frog.  Secondly, I was wrong about my own rating; I ended up moving it from 5/10 to 7/10 after watching it again, because I thought it earned that much for being so damned catchy.  Frozen really is an icon we’ll look back on, and the music has stuck with me through the years, so I’m willing to admit that I judged it harshly.  At the same time, I think it’s imperfect, very specifically flawed, and my opinion on that won’t be modified.  Sitting down to see Frozen II, I attempted to open my mind, acknowledging my prior mistake, and I’m pleased to announce that I quite enjoyed it.  The sequel is pretty much as good as the original, if problematic in the exact same ways, leading me to like, but not love, this Disney moneymaker extraordinaire.

The Sisters Arendelle are happy now, back at their castle with the gates open and their hearts free, having put all their struggles behind them.  Anna is with Kristoff, Elsa is no longer an icy island, Olaf is his usually bubbly self; things couldn’t be better.  But the history of the kingdom and a long-held secret are about to come back to haunt this idyllic scene, starting with a mysterious voice which seems to call to Elsa.  The old gang is back on another adventure, this time together, as they attempt to find the strange voice, reveal the secret of a generation ago, and answer all the riddles, which are somehow tied to Elsa’s magical powers.  Traveling north, they discover a fog-enshrouded realm where nature was once at peace, but has been unbalanced for years, thanks to a betrayal many years before.  Elsa will have to realize her full potential, Anna will be the one to let go this time, Kristoff had better find his courage, and Olaf should probably have stayed home, but there’s no going back now, as problems this big must be faced and fought united.

The problem I had with Frozen was that it started great and ended sloppy.  The beginning was full of music, characters, beauty, I was hooked, and then the entire last hour was too much Olaf, too much dialogue, and too little intrigue.  The problem I have with Frozen II is the exact same, but also the exact opposite.  The beginning was awful, muddled, the songs were flippant, and I was just wasn’t interested in what they seemed to be making up on the spot like some sort of animated skit.  But the ending, the last half really, was the film’s saving grace, and got me to walk back all the bad stuff I was building up to say as soon as the credits rolled.  I just wish Disney could get it right with this franchise over the course of an hour and a half; how hard is that?  Spread out the high points, keep the goofiness to a minimum, and, if there’s ever a Frozen III, learn from your mistakes, people.

But back to the second half of the movie, which was awesome, and is what I’ll ultimately remember when it’s all said and done.  When the characters were separated they really came into their own; Kristoff with a real song, Anna with a dangerous journey, Elsa with internal work she had to do alone.  And my god were the Elsa scenes fabulous, taking what we’d seen before from her and moving it up many levels.  Her songs and her scenes were magic, from fighting water itself to discovering the breadth of her own power, it was all very special, and should be what becomes the focus of what went well for this flick.  Olaf was kinda hilarious, I hate to admit, especially in his retelling of the original story arc, and as I said, Kristoff had his own song, which was so boss in a Peter Cetera ‘Glory of Love’ kind of way.  I liked the end to the tale, it felt final and well-wrapped, I liked the northern kingdom, I liked the power/magic/nature that resided there, I thought there was a ton being said beneath the surface about relevant, important issues; it all felt like a great and laudable success when the curtain came down.