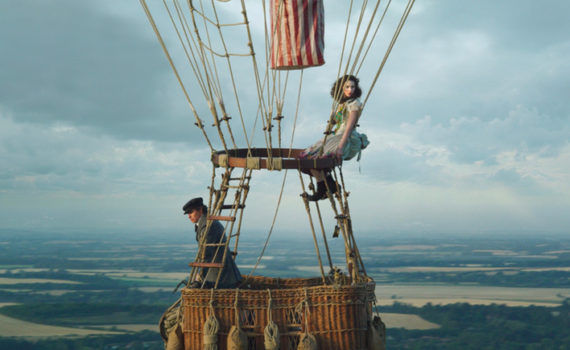 I put a few movies off until the end of the season, mostly because they didn’t have much awards buzz or hadn’t given me any strong, personal reason to watch.  Most of those have turned out to be (predictably) mediocre, films that are either amateur or fringe or overly-artistic, or sometimes plain boring.  I assumed that The Aeronauts would fall into one of those categories or one very similar; I did not expect it to be so god-awful.  Not only is this movie one of the very worst of the entire year, it’s also an embarrassing insult to those few audience members who were brave enough to watch it, a complete and shocking mistake that (get ready for a pun) I wish had never made it off the ground.

This is the (kinda) true story of the beginning of meteorology (kinda), as a young scientist dares to reach higher than anyone on Earth has ever dared before.  James Glaisher wants to make a name for himself in London in the 1860s, and his passion is weather; the mathematics, the discovery, even the possibility of prediction.  He knows that if the scientific community can understand weather patterns better, they can uncover countless discoveries, leading to prediction and ultimately the betterment of humanity.  But first he needs to go up where no man has gone before, and the hot air balloon is the only vehicle that can carry him.  Enlisting daredevil pilot Amelia Wren, the pair soar into the heavens, to experience danger, wonder, and sights that no human has ever had the privilege to behold.

Sounds good maybe, sounds cool, sounds interesting, and hey, this team has worked well together before, in The Theory of Everything, so why not give it another go?  Well, turns out the idea wasn’t the horrible part, it was the execution, and, yeah, maybe also parts of the idea.  The action is dumb, forced, unbelievable, silly, skit-like, and just generally insulting to people with working brains.  It’s a colossal joke, this plot and this performance, like everyone spent three days shooting some parts and then making the rest up on a computer, a complete phone in if I’ve ever seen one.  And then there’s the “true story”, which really bothered me.  Glaisher was a real person, but Wren was not, in fact they created her character to “represent women”.  So, no, this didn’t happen, this imaginary person didn’t save his life over & over again while he bumbled around in a balloon, and how she became the main character is beyond me, since SHE ISN’T REAL.  I get making up portions of a true tale to make it more dramatic, but this is absurd, this is almost farce, and it’s definitely not worth your time watching.