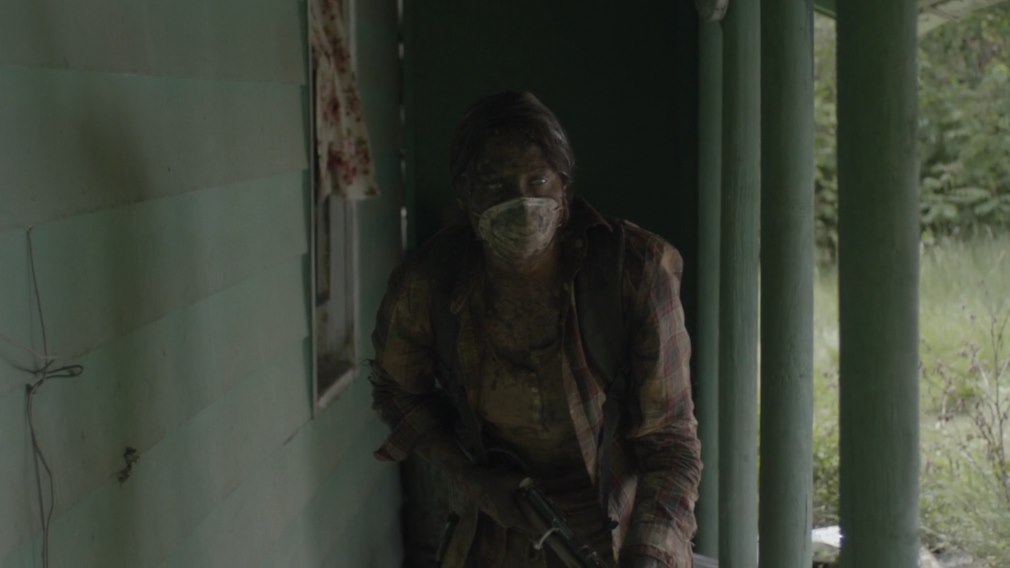 A random, low-budget zombie movie that probably should have remained unseen, Here Alone is a concept that never comes to completion, which is disappointing because of the potential that could be seen from the very beginning.  The unfortunate part is that the obvious good start went obviously wrong right before our eyes, we could see it happening, but we were powerless to stop the trajectory, and that wasn’t any fun.  Blackhurst is still an amateur in the full-length feature corner, so perhaps there are better things to come, perhaps he’s just getting warmed up, and perhaps we just need to wait.  His take on the survivalist genre didn’t work, but there were pieces that did; too bad they didn’t pop up more often.

A virus has struck the country, maybe the world, and its destructive force devastates the population, wiping out overnight the old order.  Most humans have either died or have turned into some sort of man-eating monster; the details aren’t clear, but it starts with a virus and ends with a hunger for flesh.  One woman, who had once run away in the woods with her husband and daughter, must fight for her survival and for her sanity, as the weight of being alone is as heavy as the need to stay alive.  When Ann comes across Chris & Olivia, the walls she’s built around her heart start to crumble, but that might be exactly what gets her killed.

There are just a lot of problems with this film, which isn’t a shock, given its beginner status and its lack of polished actors.  The acting becomes one of the most troubling issues, not from the lead, I thought Lucy Walters was solid throughout, and I enjoyed that they gave us her story, her process, and her mind in drips, keeping us involved and curious.  No, the actors around her were the problem, they just weren’t up to snuff, and so it all felt more like a skit whenever they were the focal point.  She was great; attractive, strong, convincing.  But the writing, the zombie aspects, the other characters, they were all either cheap, throwaway, or just plain bad.  It was a nice concept, but not well-executed, and the lack of quality bit the film in the butt far too often to forgive.