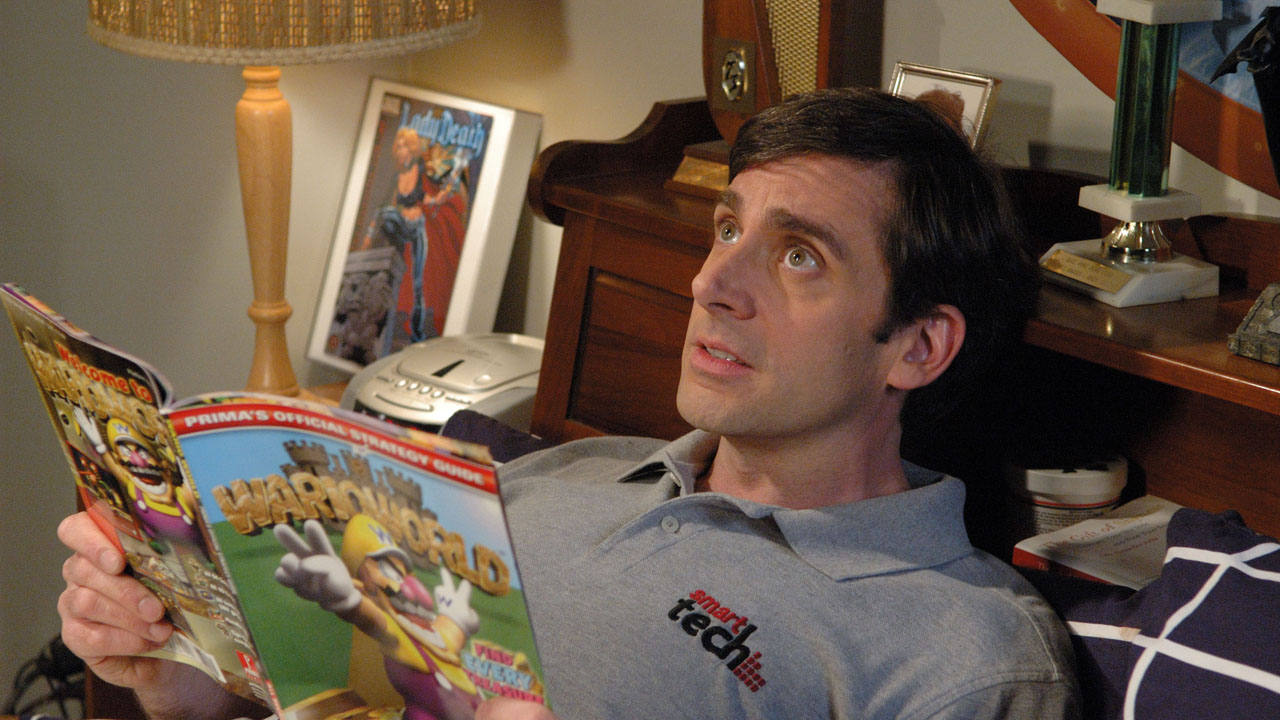 I think it’s fair to call The 40-Year-Old Virgin a comedic pillar; it’s obviously not everyone’s favorite movie, but it helped launch Steve Carell’s career and it put Judd Apatow on the map. Also, it’s simply memorable, a comedy that represents an era, like American Pie or Meet the Parents. Again, not everyone’s cup of tea, and the content alone will push some audiences away, but raunchy coming-of-age tales are here to stay, whether their characters find themselves in their teens, 20s, 30s, or, in this case, their 40s. This movie really is a prototype of the genre, just from a different perspective, and with a lead actor who is obviously talented enough to put the entire thing on his shoulders when it’s called for.

Andy lives alone, collects action figures, plays video games, works at an electronics store, never learned how to drive, has no friends, and kinda seems like a serial killer. Oh, and he’s also a virgin who has never visited any base and has recently turned 40. Sex has always been on his mind, obviously, but over the years it’s become a bigger and bigger issue, something that he doesn’t want to define him but which he can’t escape. When the guys at the store find out he’s a virgin, they offer to help, but their “help” is just confusing and stupid and downright wrong. But then Andy meets Trish, a woman who owns a store across the street, and they fall for each other hard. The only problem is, can he tell her about his status, will it frighten her away, and will he be up for the task once it’s finally the right time?

Obviously sex is a major player in this film, almost like American Pie, but for adults. The club scene, speed dating, prostitutes, drunk chicks, porn; it’s all there, so don’t be shocked, and don’t watch this with your mom. Also, I’ve seen the unrated version; don’t watch that either. It’s just badly edited and makes for a much less enjoyable film experience, because beyond the stupid sex comedy element, the movie itself is pretty good and deserves regular cinematic attention. I’m not saying it changed my life, but it’s funny and well-made, so hats off to all involved. Carell is a natural, he makes it all work, and his character is just so pathetically lovable, he can’t help but root for him. And the supporting cast is strong: Paul Rudd, Romany Malco, Seth Rogen, Elizabeth Banks, Leslie Mann, Jane Lynch, Kat Dennings, Jonah Hill. The 40-Year-Old Virgin is a must-see comedy for its impact and for what it does right, but the ceiling was built fairly low, so don’t expect to love it or to run out and buy the DVD. It’s still silly and juvenile and perverted, it’s just also amusing because of those things, so enjoy the movie for what it is.