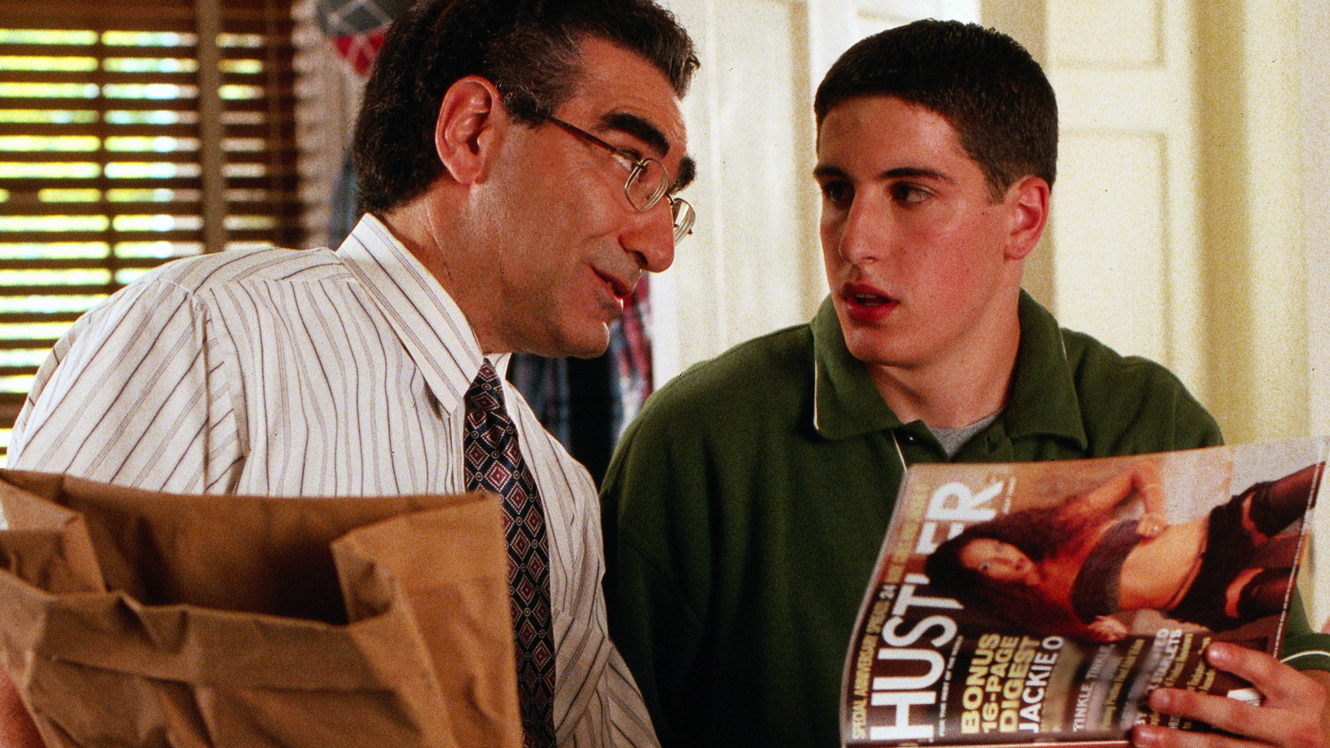 I recently reviewed The Departed and talked about what an amazing cast the film had.  Well, and don’t get me wrong, I’m not comparing American Pie to that film, but you’ve got to respect the cast of this movie too, if in a totally different way.  Just look at these names: Biggs, Klein, Reid, Suvari, Elizabeth.  These are the big young names of the late 90/early 2000s, actors who have this movie to thank for launching them into stardom, or at least fifteen-minute-fame-dom.  I guess it’s both a blessing and a curse that you can’t picture Jason Biggs without also picturing a mutilated apple pie, but give this film credit, it made each of these actors a household name, at least for a while, and solidified its place as a teen classic that will never be forgotten.

In the spring of their senior year of high school, a group of four friends make a pact.  They promise each other to do whatever it takes to all lose their virginity by the end of prom, to become the men they’ve been dying to be for the past four years.  Jim is a bumbling sweetheart, a guy who can’t talk to girls and can’t seem to keep his penis in his pants.  Oz is a jock, a ladies man, but has never gone all the way.  Kevin has a girlfriend, but can’t seem to give her an orgasm or tell her he loves her, two obstacles on his way to home plate.  And Finch, who brings coffee to school and goes home to use the bathroom, might be a little too odd for normal high school relationships.  With the help of beer, parties, and good friends, these dudes will try their best to get laid, sooner rather than later.

This is a movie that takes me back, that I can recall watching exactly, that makes me think of high school like no other film can.  At the time, American Pie was a big deal, a raunchy comedy that your parents wouldn’t want you to watch and that your friends would surely be talking about at school.  You literally had to watch it or risk alienation, and when you did watch it you discovered that perhaps you weren’t alone in your teenage awkwardness after all.  Yes, it was full of disgusting sight gags, jokes about bodily fluids, and the theme was young men having sex no matter what.  But in the end the story becomes about something deeper, a reminder that everyone goes through high school, that sex isn’t the pinnacle of existence, that it’s OK to make mistakes, and that your friends are there for you no matter how big a fool you make of yourself.  American Pie will always remind me of growing up, of testing boundaries, and of the good times that come amidst the embarrassing ones.