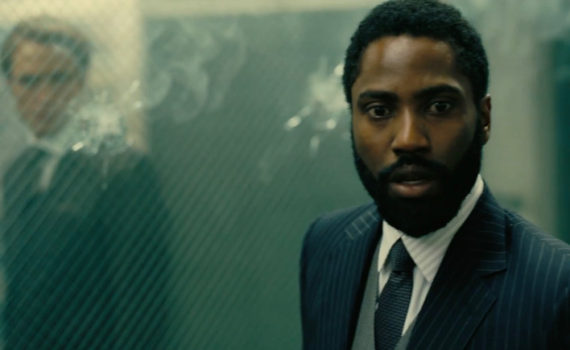 I’m going to keep this Tenet review short on purpose, because I think it could get really out of hand really quickly.  I love that Nolan makes bold choices, takes bold chances, and doesn’t play it safe; we love his movies, even the ones that aren’t perfect, for those exact reasons.  He’s thoughtful, interesting, loves to craft entertainment, and forces audiences to think, all of which I really appreciate.  Tenet might not be The Prestige, Inception, or Interstellar, it might actually be copies of pieces of those films layered on top of one another, forced to resemble something great but not truly being great on its own, BUT that doesn’t mean that this film doesn’t have solid chunks to offer of us, if only we can search through the rubble to find them.

The protagonist of our story is a special government operative, an elite soldier in the fight against global chaos, and he’s willing to continuously put his life in jeopardy to complete his goals.  His latest rescue mission almost turns deadly, and unearths an extremely strange phenomenon; items in our world that seem to be moving backward through time.  Given the code word ‘tenet’ to use at his disposal, our hero sets off on a journey through time, forward and backward, on his way to discover the truth about weaponizing the trajectory of both objects and people through special gateways called ‘turnstiles’ that reverse your time direction.  It’s almost impossible to comprehend, but the world needs him to learn fast, because there are future forces at work that want us all dead.

Tenet definitely feels like Inception, but with other Nolan films thrown in for good measure.  It’s definitely a cool idea given the Nolan treatment, until it comes out feeling like something we’ve seen before based on a concept that is incredible innovative.  I liked the technology, I liked the layered story arcs, I liked the action, and I liked the acting, for the most part; Tenet is a cool film, solid entertainment, and truly a mind-melter.  But that doesn’t make it perfect; there are definitely issues abounding.  One is the dialogue, which is sometimes muffled, sometimes nonsensical, sometimes throwaway, and often not very high-caliber.  I could have used less talking, less description, more ambiguity, and some editing down into something more streamlined.  The “twists” were easy to see coming, even if you weren’t trying to guess them, and some the scenes were very predictable, bolstered by their inventiveness, sure, but sometimes dragged down by their clunky delivery.  In the movie’s defense, I found myself curious, captivated, and wanting to see it a second time to completely understand it, which I guess is good enough for a quality rating, though I wouldn’t say that Tenet is one of Nolan’s absolute best.