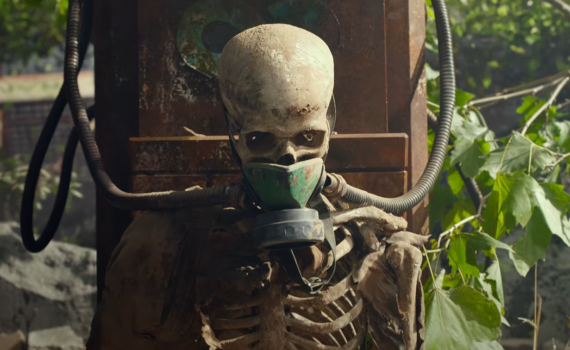 Did 2067 enact the forcible-arm-bracelet-in-a-time-travel-movie idea first, beating out Tomorrow War?  If it did, I guess it doesn’t matter, because neither are good films, both made a ton of mistakes, one you’ve simply heard of because it stars Chris Pratt and was on Netflix, while the other faded into obscurity as soon as it was spoken into existence.  2067 isn’t good, but it does have some good concepts, only executed with the skill of a 4-year-old with a butter knife and a cardboard box.  It’s a failure on most levels, which is quite disappointing, because there are many times it feels like you’ve almost watched something smart, only to be left dumber.

In the future, not too far away, the world’s environmental problems with become a crisis; storms will rise, climate will change, plant life with die, and humans will be left without breathable air.  We’ll survive somehow, off nuclear power and artificial oxygen, but our lives will hardly be worth living, more a scratching by than an actual fulfilling existence.  But a chance to change that arises; a brilliant scientist has developed a time machine, sort of, and it seems that there is a message being sent back from 400 years into the future, which states that they need his son, Ethen Whyte, to come forward through time, potentially giving humanity one last opportunity to save themselves.

I didn’t really appreciate the looping plot until the very end, when all barriers were dropped and we were allowed to understand the complexities of the story, which was somehow too late.  I wouldn’t have wanted them to give away all the goods early, but somehow we find out that this movie is kinda cool far too late in the game, maybe because the actual execution up until that moment was incredibly subpar.  The acting in this film is abysmal, and I love KSMcP, he’s a great young actor, he simply screamed, wailed, and cried too much, and every one else around him just sucked, and hard.  The music of the movie was also horrible, surprisingly so, and helped make the entire thing feel cheap, amateur, and almost an afterthought.  It’s a clever plot, could have worked, should have been given to someone else to direct, and maybe deserved more money thrown it’s way; as it stands, I can’t recommend how it turned out, I can only dream that it had turned out better.