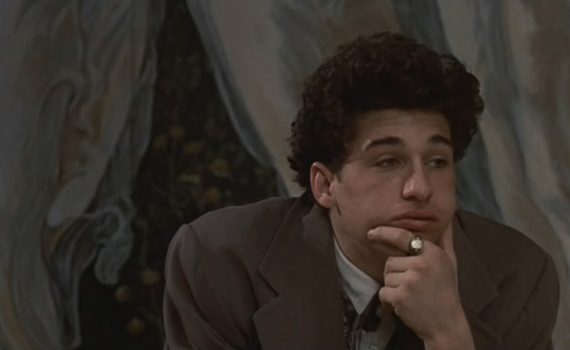 At first, Some Girls feels like a formula we’ve seen far too often; young love, an eccentric family, comedic confusion.  That kind of dramody comes a dime a dozen, and it seems like each new film that fits that mold is simply trying to copy You Can’t Take It With You, just with an artistic twist that’s mostly only bizarre.  But that feeling only lasted until a change in the plot led the characters down a different path, and that created a new atmosphere that was anything but typical.  The film soon morphed into something much more meaningful, much more beautiful, aided by terrific music and a whimsical air.  By the end, I was of two minds, like I had watched two movies, both of them very strange, but only one very good.

Michael and Gabriella dated in college; passionate young love, at least on Michael’s part.  When her grandmother got sick, she left school, and did not come back, breaking his heart, since he thought for sure this was a love you only read about.  Out of the blue, Gabriella invites Michael up to Quebec City for the winter holidays, where her wealthy family owns a large house and will all be gathered together.  Overjoyed to be seeing her again, he flies north, only to be confronted with the fact that she might not love him any more, which begs the question of why she invited him.  But as he gets to know her extremely close (and extremely wacky) family, he learns that fate might have another purpose for his visit, and love comes in many forms.

This was back in the early days for Patrick Dempsey, back when he was a young heartthrob in the making.  He was more than that though, he was a very talented actor, and regardless of what you think of his career choices I do believe he still is.  He sure was in Some Girls, which forced him to carry a fairly heavy plot upon fairly young shoulders.  But he did it, and he did it well, so hats off.  The film starts slowly, typically, the family is weird, the daughters are hot, Michael is confused, young love stinks, blah blah blah.  But it does get better, if you’re patient for a little while, when the story takes another direction and the grandmother character is introduced.  That’s when the message gets a little deeper, and that’s when the quality picks up, if you’re still around at that point.  The film needed to be more rounded all the way through (it’s not our job to outlast the poor parts), but there are pieces to appreciate scattered throughout, especially by the end, which makes Some Girls worth a watch.