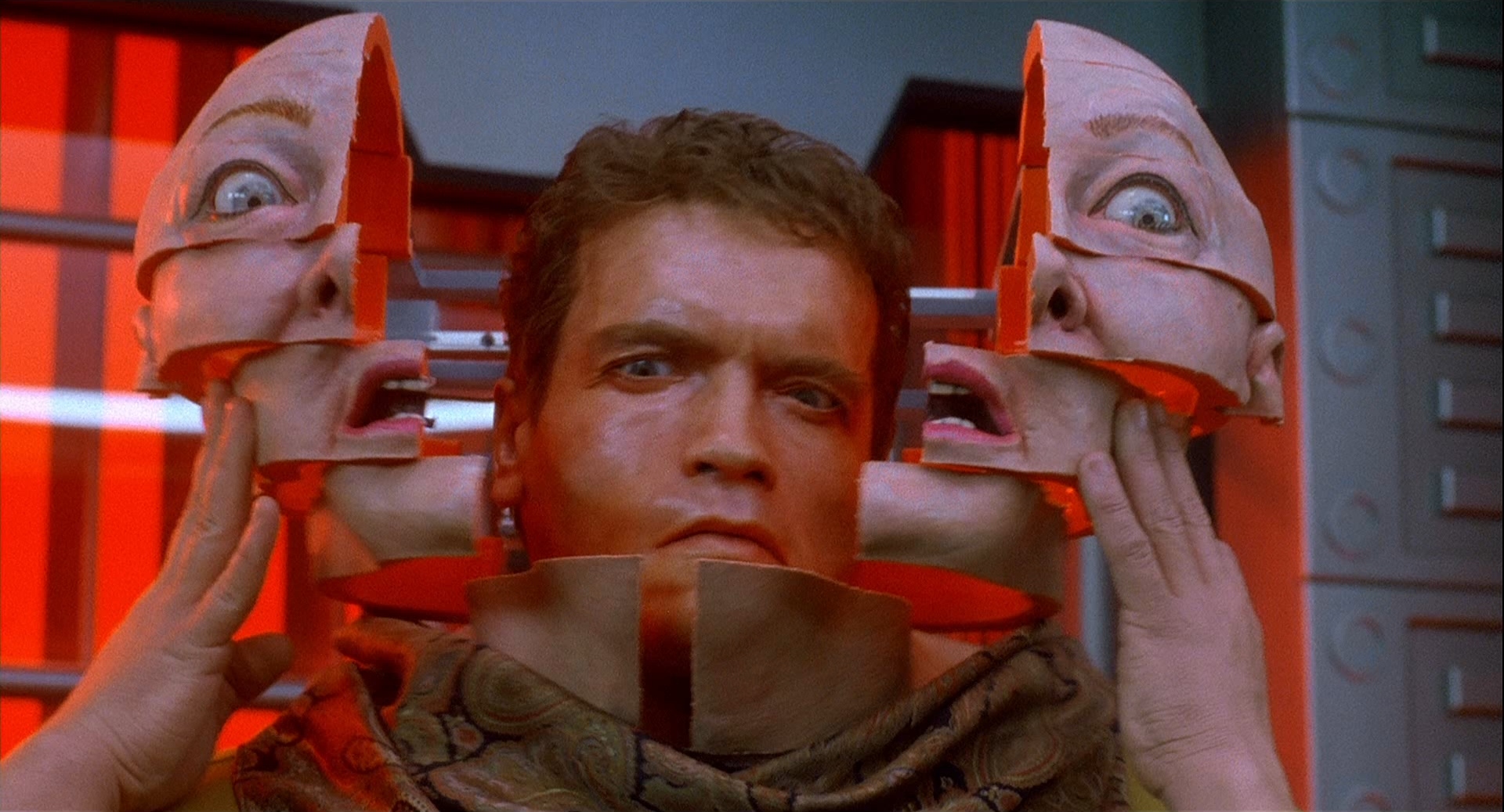 Better than Fifth Element, not quite as good as Starship Troopers, Total Recall is totally bananas, but somehow also kinda awesome.  Its artistic audacity definitely paved the way for the future of over-the-top sci-fi, at the same time as it honored all those b-movies that had come before.  The result is a wonky wonderland of caricatures and experiments that work more often than they probably should, and sometimes verge on genius.  Now, don’t get too excited; this movie is still bat-shit crazy and mostly terrible, since apparently they decided that none of its actors needed to be able to act.  But that doesn’t stop every film, and it definitely didn’t stop this one, a roller-coaster of regret and entertainment that comes at you in wacky waves.

Douglas Quaid is a lucky guy; he’s got a hot wife who loves him, a good job that keeps him strong, some friends to go have a beer with, and he’s far away from the problems brewing on Mars, where a rebel force fights against an evil corporation that looks to exploit anyone who ventures to the Red Planet.  But Doug keeps dreaming about Mars all the same, keeps thinking about going there, even though that makes no sense.  To satisfy the urge, he heads to Rekall, a modern day travel agency that implants memories into your mind so you don’t have to go anywhere special to feel like you’ve been somewhere magical.  Doug wants Mars in his mind, but he also chooses to pretend to have been a spy with a great love affair there, which only costs a little extra.  Problem is, when he receives the service something goes wrong, and now Doug is convinced beyond a doubt that people are trying to kill him, that he actually is a spy, and that he must go to Mars immediately to save the world.

Paul Verhoeven is a cinematic mad scientist, and audiences are his faithful test subjects.  Flesh+Blood, RoboCop, Total Recall, Basic Instinct, Showgirls, Starship Troopers, Hollow Man, Black Book, Elle; obviously there are some absolute dogs on that list, but they are experiments all, it’s just that some fail, while somehow others turn into verified cult classics.  He’s fun to watch, at least there’s that, and even Showgirls, considered one of the worst movies ever made, has something going for it; you have to see it at least once.  Verhoeven is something else, and that’s worth our attention, if just to take a break from normal for 90 minutes.  Total Recall is definitely abnormal, and some times downright nutty.  It’s gory, it’s gross, it’s full of practical effects (some questionable), it makes very little sense, and my god is the acting bad.  So is the action, so is the plot, so is the execution, but somehow, it’s hard to say exactly why, the movie works anyway.  It’s so fun that you forgive how bonkers it is, so challenging that you applaud its passion for sci-fi freak-outs.  Verhoeven simply knows what he wants to do and does it, whether it’s the sane choice or not, and quite often we find that we love his oddball ideas because they are so daring.  Total Recall is complete chaos, but also lovable, which is why it has endured this long.