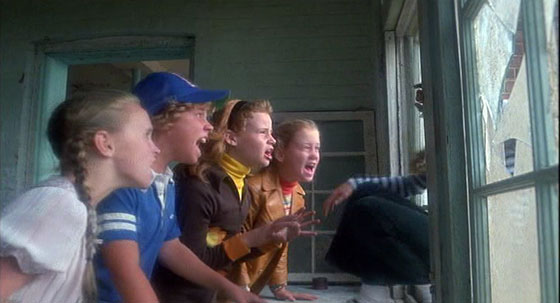 I’ve seen much of Jamie Lee Curtis’ early career, mostly because she was a bad ass, a hottie, an amazing actor, and a stand out, from Halloween to Trading Places, from Grandview U.S.A. to A Fish Called Wanda, from My Girl to True Lies.  If that’s where her hits fizzled out she can hardly be blamed; Hollywood has always had a problem with aging actresses, and they didn’t give her much of a chance even before 40.  But we know her value, she’s an icon, and can even make less-than-iconic films a little better with her presence.  Case in point; Prom Night, which is no Halloween, and is mostly no good.

While playing in an abandoned building, four youngsters accidentally taunt a younger girl out a broken window, where she falls to her death.  They make a vow to each other that they will never tell the truth, and the murder is pinned on a male suspect who is then chased, captured, and disfigured.  Years later, the young girl’s family still mourns her death, including her siblings Kim & Alex.  They try to enjoy the upcoming prom, getting dates and avoiding creeps, but they can’t help thinking about how their sister should be there too, enjoying her youth and innocence.  Someone else is thinking about her at the same time, a mysterious, stalking figure who begins threatening and then killing the four who were actually responsible, in gruesome ways that only a madman could devise.

The biggest problem with Prom Night is that it doesn’t feature Jamie Lee Curtis enough.  She wasn’t a big star yet, though she had been in Halloween, and I guess she was the main character, but not heavily enough, because everyone else involved sucked.  It’s a ridiculous time capsule of 1980, including long dance scenes and locker room sequences that will make you shake your head.  Not original, not well done, not cool, and not sexy; there are a lot of things this film isn’t.  There is a little blood, a flash of skin, it’s creepy it a strange way, but focuses too much on the Prom in a Carrie way that never works; come to think of it, every aspect of the movie looks like a carbon copy of something else, which I guess is the why it’s not any good.