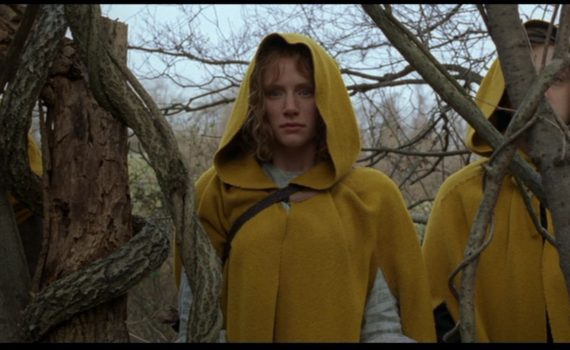 If Signs is Shyamalan’s best (although some people are partial to Sixth Sense), The Village is #2, a film that almost gets it all right in a way that few directors have ever been able to pull off.  We all know Shyamalan’s penchant for twists, and he brings his A-game here, but that’s not really the point, if you really think about it.  Why do we watch movies?  For entertainment, obviously, and The Village is about as entertaining a film as I have ever seen.  If you want to spoil the ending for yourself by trying to outsmart the master, if that makes you feel good, so be it.  Me, I’ll be sitting back enjoying an excellent story woven with extreme talent, because that seems like more fun.

In a small village in a valley in a wood, a group of people live a simple existence by a simple rule; we don’t go to their forest, they won’t come to our homes.  Those We Don’t Speak Of wear red, stay in the trees, and claim that domain, while the humans wear yellow, stay in the village, and agree not to cross the border.  In the valley there is safety, peace from the outside World and from the Towns, where men are crueler than beasts.  But when that peace is threatened by an animal or creature or something, skinning small livestock and leaving their bodies as a sign, that idyllic existence looks to be broken.  Two young people newly in love, Ivy & Lucious, will have to brave the dangers of the wood, but also the unknown dangers of those much closer to them, in order to uncover the secrets holding the fragile truce together.

I don’t mean to pretend like I’ve never been disappointed by a director, never figured out the secret, never felt like I was smarter that the filmmaker.  Of course I have, and that’s a disappointment, but I’ve never understood why people were so joyous in ruining their own experiences when it came to Shyamalan’s films, because, meanwhile, they were missing out on some incredible artistry.  The Village is complicated, fascinating, it builds slowly, it supremely creeps me out, and it’s a ton of dark fun, if only you can let it wash over you and not pick it apart.  Now, I can be critical, I get it, it’s not perfect; the depiction of Noah is problematic, the acting isn’t always perfect, some lines feel clunky, and M. Night popping up in his own movie is not really a good choice this time.  But there are many more positives than negatives; the music, the mood, the threat of the creatures, the secrecy of the elders, and one powerful monologue from Hurt that is still shocking and impressive.  Howard was great in an early role, Phoenix is a master, Hurt was phenomenal, and the rest of the cast was impressive; Adrien Brody, Sigourney Weaver, Brendan Gleeson, Cherry Jones, Judy Greer, Fran Kranz, Michael Pitt, Jesse Eisenberg.  Sixth Sense might have been more surprising, Signs might have been more seamless, but The Village is an amazing work of fiction, a story to sink into, and an excellent film to revisit often.