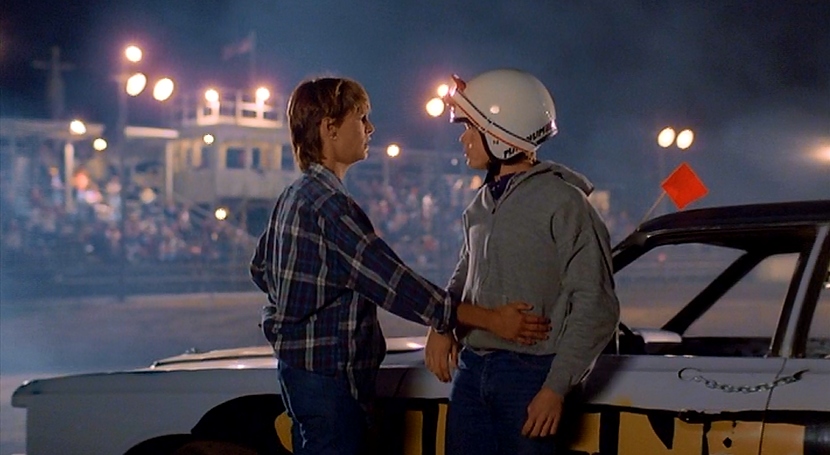 We who love movies also tend to love John Hughes, and can probably rattle off a list of his films by heart; directing Sixteen Candles, The Breakfast Club, Weird Science, Ferris Bueller, Plane Trains & Automobiles, She’s Having a Baby, Uncle Buck, Curly Sue, and writing National Lampoon’s Vacation, Mr. Mom, Pretty in Pink, The Great Outdoors, Christmas Vacation, Home Alone, Dutch, Beethoven.  The 80s & early 90s belonged to Hughes, but there was another director pumping out the hits at the time, films that would become period classics, a director who gets far less attention, and that would be Randal Kleiser.  The Boy in the Plastic Bubble, Grease, The Blue Lagoon, Flight of the Navigator, Big Top Pee-wee, White Fang, Honey I Blew up the Kid; Kleiser’s successes reach back into the late 70s and also then mirror Hughes’ timeline.  He’s a director to know, respect, and appreciate, as is his 1984 film Grandview USA, a pre-Bueller coming-of-age comedy that shouldn’t fly under the radar any longer. Life in Grandview, Illinois is both comfortable & boring in that good old fashioned American small town way.  You listen to your parents, you date the girl, you take her to prom, you make out in your dad’s Cadillac, you go to college, you become a trustee, you grow old & die, never experiencing anything quite as exciting or dangerous as a real life.  For Tim, the valedictorian of the local high school, this is the path set for him, without much chance of a change.  What he really wants to do is move to Florida to become a marine biologist, but that isn’t within the family plan, isn’t within the financial realm either, at least not yet, and seems as far away as the moon for a boy who’s just going to fall in line like everyone else.

But a brief encounter with a beautiful & completely unique woman nicknamed Mike opens up a new future for Tim, one in which he can do whatever he wants.  Mike runs the crash derby outside of town, has ever since her father died, and is just managing to keep her head above water.  But the town trustees want to shut her down, have their own plans for the land, and will stop at nothing to see her fail.  With the help of Tim and a wild derby driver called Slam, Mike will begin to understand that not all of Grandview is against her, and not everyone is devoted to the straight-laced American dream.  Tim, meanwhile, falls in love with this older, cooler woman, learning from her the value of being yourself, of questioning everything, and of choosing your own destiny. Shockingly good, Grandview USA is also shockingly 80s in the way that you might have thought that only Hughes could pull off.  In fact, there are more than a view scenes & characters that seem straight Ferris Bueller, and two years before that iconic film debuted.  A well-loved boy lead, his annoying sister, MTV on TV in his room, a shower/deodorant scene with Hughes written all over it, an Illinois setting, a musical number; it’s remarkable how similar this film feels to so many other, better-known films.  It’s like an adult version that Hughes pared down into a more teen-friendly, comedic, & commercial version, taking away the sex, boobs, and most of the swear words to create something a little better, sure, but also something with a little wider appear.

There’s no reason that Grandview shouldn’t have its own appeal though, completely separated from the fact that it’s basically done in Sixteen Candles style, which came out the same year, complete with a school dance and the Cusack siblings.  Grandview is a bit darker perhaps, but features as many name actors as any Hughes film, just a different cast set, apart from the Cusacks anyway.  Howell and Swayze were just coming off The Outsiders, a big hit the year before.  Curtis had done two Halloween movies and Trading Places, beginning a phenomenal career that would skyrocket from here.  And a cool side cast pops up as well: Jennifer Jason Leigh, Troy Donahue, M. Emmet Walsh, John Philbin, and of course John & Joan Cusack.  There’s heart here enough to gloss over the mistakes of the time, there’s a great small town feel that most everyone can relate to, there’s some good young acting from future stars, and there’s 80s nostalgia done before the 80s nostalgia we know & love.  Check out this film if you get the genre; it’s something we shouldn’t let slide by any longer. Video – With an aspect ratio of 1.85:1 (1920 x 1080p), the video quality of the Blu-ray disc, especially considering the transfer, was excellent.  For the time and moving it to new media, the picture is great, and never feels forced or painted over.  The 80s quality remains intact, but this remastered version smooths the rough edges, creating a Blu-ray of a should-be classic that was well-worth the treatment.

Audio – The Blu-ray can be enjoyed using either English 5.1 or 2.0, those being the only audio options on the disc.  No language or subtitle choices are available.  The soundtrack to this film is incredible, with a dated original song at the begging and some cool period music later on. Highly Recommended.  Grandview USA deserves more attention, specifically from Hughes fans who could benefit from seeing another director work in a similar style.  The film is like Ferris Bueller meets Footloose meets Lucas, but with a slightly more mature edge that sets it apart while still allowing it to slide into the genre.  It was great to see Curtis & Swayze together, with Howell acting as more of the storyteller in a way, the young hero that the audience can live through.  Great music, memorable scenes, a classic feel, and enough 80s goodness to appease the biggest fan; there’s no reason why this film shouldn’t be inserted into the decade’s canon.  The video was nicely redone, the audio was cool, but there are no extras on the Blu-ray disc.  I love Hughes and that won’t change, but it was nice to see someone who could weave similar magic with similar elements.