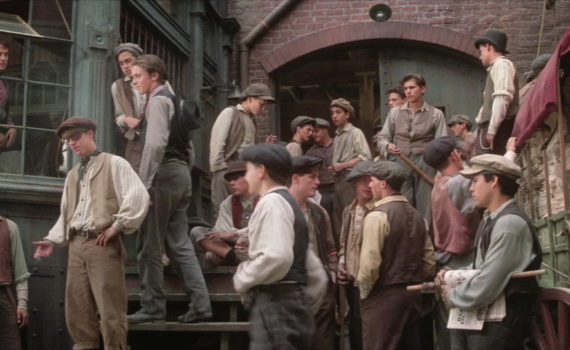 One of Christian Bale’s first roles was as Jack Kelly in this 1992 Disney sensation, an event that I remember clearly and loved dearly when I was 8.  It took a while, but eventually the movie was made into a Broadway musical, the stage always being the perfect place for this wonderful musical, but the film has lost none of its original magic.  Newsies is like Annie with a slightly rougher edge, which transitioned perfectly to Broadway; the music, the dancing, the scenery.  This was my first time watching the film in years, this time I sat down to enjoy it with my family, and I found the same special and wonderful power that I remember from almost 30 years ago, just waiting for me to experience it again.

At the turn of the last century, the blood of New York City pumped with the racket of the printing press, as the daily newspapers controlled the town with whatever stories they chose to run.  The bigwigs at the top looked down on the people below from their ivory towers, deciding their fates with a whim that was akin to madness: Roosevelt, Pulitzer, William Randolph Hearst.  But it was the newsies who delivered the message, who ran the papers through the streets and sold the headlines of the day, who had undiscovered power over the populace.  When Pulitzer tried to raise newspaper prices, the newsies, realizing their importance and led by the charismatic Jack Kelly, formed a union and went on strike, along with every child worker in New York, be he a shoe shine or a bike messenger.  They refused to be stepped on like ants in the street, choosing instead to band together to form something that could never be crushed.

I’ve seen the stage version on Netflix, and it might be slightly better, because they fixed a few errors in judgement, got some better talent perhaps, got rid of Bill Pullman, but nothing will ever entirely equal the original experience.  The songs, the rhythm, the dances, the marching; I dare your heart to stay steady or your feet not to tap.  And Christian Bale was a star at a young age, you could see it a mile away, and Jack Kelly was the perfect character for him to embody.  It takes a second to get used to the affected accents, but once you do they just serve to suck you further into the story, and help you to fall in love with every moment presented.  The adults may be forgettable, but the kids are wonderful, and the pull of the music will draw in you so very close.  The big numbers, the quiet moments, the phenomenal sets, Jack singing “Sante Fe”; you’ll fall in love with these newsies, and with the story they’re selling you.