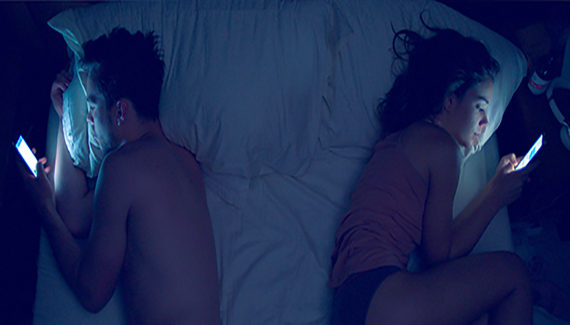 This film is a prime example of excellent ingredients not mixing well enough to create a great-tasting product.  Drake Doremus’ last film was Equals, which I really enjoyed, much more than most audiences and critics.  He likes to tell very specific love stories (Like Crazy, Breathe In), and Equals had the bonus of being dystopian as well.  Hoult we’ve seen heading our way for quite some time, those of us who’ve been watching (Young Ones, X-Men, Fury Road), so it’s no surprise that he’s now a heartthrob candidate.  And Costa stunned in Victoria, the one-shot masterwork.  Again, perfect pieces, but that doesn’t always mean that they will come together in a way that’s pleasing, especially if the story doesn’t support the crew.

Martin & Gabi are millennials who now find themselves entering adulthood without any real knowledge of how to be happy.  They both date on apps, part of a modern hook-up culture that doesn’t satisfy their emotional needs, and usually leaves them frustrated.  He is running from a bumpy past, she can’t stand for any situation to begin to feel old, so they both cruise along having sex with strangers and never getting anything in return.  When they are matched and meet up, they both realize that here is a special person, someone they can both see a future with.  But their routines get in the way, their reliance on personal freedoms, their desire for other people.  An open relationship is an option, but perhaps not one that can be sustained past the first permissible betrayal.

I like how Doremus brings us right into the lives of his couples, how we get to experience everything right along side them, get to share in their jokes and small talk and eccentricities.  And I love Hoult, am a fan of Costa, want these young actors to make it big, so I was rooting for this film from the very beginning.  It makes a good point, it’s fairly sexy, I think the topic is relevant; there are positives here if you want there to be.  But the biggest problem I had with the film was its story, which never really went anywhere but down.  It was depressing in layers, more and more so as time dragged on, and it won’t matter to most audiences whether the ending is happy, sad, or ambiguous.  I can imagine some people not even making it all the way through; there were times I felt like giving up on the plot myself.  It’s heavy without much let up, and that’s something a director should be able to guide his movie away from.  At times the dialogue seemed spontaneous, which I’m usually a proponent of, but it didn’t work her, Doremus is no Swanberg.  The film as a whole just didn’t function the way it needed to in order to draw us all the way in, and by the end I was simply glad that it was over.