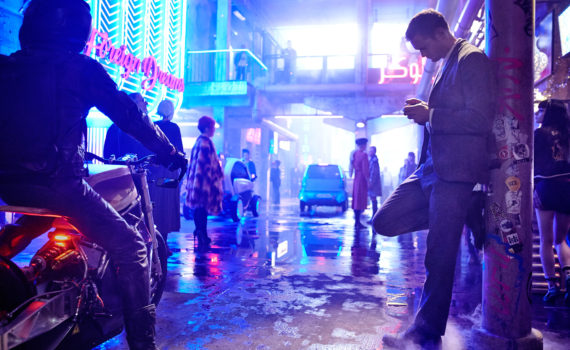 Duncan Jones has directed four films: Moon, Source Code, Warcraft, and Mute.  He also wrote them, except Source Code, so there’s no denying that he has talent, but his latest movie isn’t a very good display of that fact.  Moon was so cool; simple, subtle, compelling, heartfelt, and a great example of the modern sci-fi/drama genre.  Mute takes place in the same universe, but lacks all the qualities that made Jones’ first project so successful.  Its star doesn’t speak, which is an interesting gimmick, but one that gets old very fast.  Its costar is a known goofball, which is hard to get over.  And its entire plot banks on the fact that you’re extremely caffeinated and easily excited by tiny details that never add up to a story worth watching.

Leo is a mute bartender, never regaining his voice after a boating/swimming accident when he was a child.  His family was strict Amish, so they let God take healing his wound in hand, and apparently God had better things to do.  Now, as a grown man, Leo works in a bar in Berlin, where, 40 years in our future, things are as messed up as they were 30 years in our past.  His girlfriend, Naadirah, works alongside him as a cocktail waitress, but she’s involved in something sinister that she can’t tell Leo about, knowing how stridently he keeps to the straight and narrow path.  When she goes missing, no one is safe from his wrath and his investigation, including two underworld surgeons named Bill and Duck, a pair of men with more than their fair share of secrets.

Netflix is really pissing me off lately.  They looked to be turning the corner, leaving middling dramodies behind for much more solid fare, like Win It All, War Machine, The Meyerowitz Stories, Mudbound.  But then came Bright, Cloverfield Paradox, and now Mute, movies that are now below this production company, or at least should be.  While at the same time, Godless, The Polka King, and A Futile and Stupid Gesture were all super, so I don’t know what to think.  Maybe Netflix simply isn’t to be trusted yet; they definitely didn’t earn any with this flop.  Mute is what happens when someone with the skill of What Happened to Monday thinks they can pull off Blade Runner 2049, but they really can’t, and that’s not a major knock on Jones, he just got in over his head.  The movie is pointless, plotless, boring, too much happens, and not enough happens; it’s a sticky mess, and unfortunately it has nothing to do with Moon.  Netflix will try again, they’ll do better, and so will Jones; I guess we’ll just have to be patient.