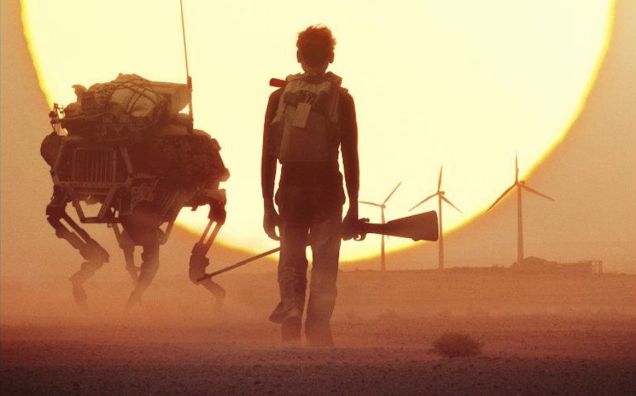 An aptly named film if ever there was one, Young Ones is a title that refers to its actors as much as its content.  It’s a story about growing up, but putting that aside, here’s a cast who are coming into their own as well.  You may remember Nicholas Hoult from About a Boy where he played, well, the boy.  Many years later he would co-star in X-Men: First Class and Warm Bodies, but this is his first “adult” role.  Kodi Smit-McPhee is a child star as well, with his big break coming alongside Viggo Mortensen in The Road at the age of thirteen.  And last but not least, Elle Fanning, Dakota’s little sister, who grew up playing the younger version of her sister in many films, not starring on her own until 2010.  Now she too plays an older character for the first time, making Young Ones a vehicle as well as stand-alone science fiction, a film that we’ll look back on if these actors become stars and say “here’s where it happened”.

In the near future, an apocalyptic drought will hit the United States, forcing many desperate changes.  Cities and states become centralized, bordering against a less stable outside.  The governments of these independent units will work only loosely with national leadership.  And those stubborn few who cling to their land will fight for water, the only thing keeping them alive.  Ernest Holm is one of these men, a farmer who refuses to leave his homestead, living with the certain knowledge that rain must someday come again.  Until then, he & his two children, Jerome & Mary, will live however is necessary while their mother stays at an in-town home with a debilitating injury.  Ernest transports supplies on his donkey to make a living, until the day the animal dies and he’s forced to buy a machine to do the work.  This machine will become the catalyst that changes their futures, along with Mary’s lover, a young man named Flem Lever, and one decision that will haunt them all.

If you like mild science fiction, this is the film for you.  It’s only slightly post-apocalyptic, only marginally sci-fi, and never paints the entire picture of a world without water.  It’s like Automata but so much better, with a story that’s enough to hook your interest, but relying more on character development than robotics.  The film was directed by Jake Paltrow, Gwyneth’s brother, and while he’s just an amateur, there are some signs of real talent.  Speaking of, Smit-McPhee steals the show.  He’s actually older than he looks, eighteen at the time of this film, and seems polished beyond his years.  He becomes the central figure of the plot at some point, picking up where the very talented Michael Shannon leaves off.  I’ve been a little obsessed with Shannon since seeing him in Take Shelter, and he delivers another strong performance here.  I actually didn’t love either Hoult or Fanning, as Hoult always sounded like her was hiding an accent and Fanning might not be quite ready for this big of a stage.  However, Shannon & Smit-McPhee, playing father & son, were good enough to carry the story, the background the solid enough to get me interested, and the overall mood of the film was one that struck me as just enough of a Western throwback to be classic and, at the same time, original enough to be exciting.  A sci-fi flick with a deliberate pace, Young Ones is not a movie for everyone, but can be appreciated by those who enjoy a dark coming-of-age story set in a complicated time.