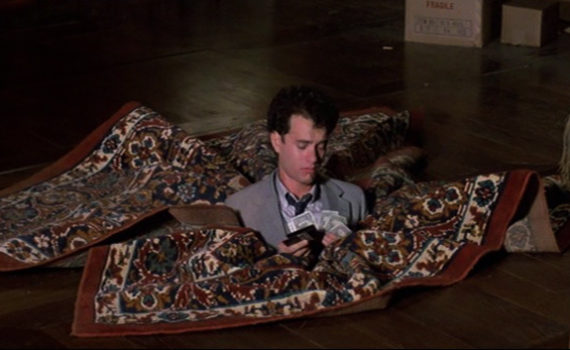 It’s becoming increasingly long ago that Tom Hanks was both a goofball comedian and a bit of a sex symbol.  That’s harder and harder to remember, especially now that we’ve seen him grow into one of the best actors in film history and star in countless powerful dramas.  But many years ago, back in ancient times called ‘The 80s’, Hanks was the man, the funny guy, the guaranteed hit, and the reason you watched a movie.  Well, most of that still applies, but he was a Hollywood hunk as well, at least in an adorable, skinny, curly-haired kind of way, something that he left behind when he began doing rom/coms and left way behind as he aged.  I don’t mean to be insulting, the guy’s a golden god, it’s just hard to remember when Hanks in a bed was exciting, scandalous, and fairly common.

Walter & Anna are a young couple in love in New York City, they’re broke but they’re happy, they live in a borrowed apartment but they’re having the time of their lives.  Walter is a lawyer who lost all his money when his crook father skipped town.  Anna is a musician with real promise, a divorcee from a previous marriage with her conductor.  Well, the Maestro has returned, we wants his apartment back, which means that Walter & Anna are homeless.  Luckily enough, or so it seems, a million-dollar house in the suburbs is on sale for 200K, the steal of the century.  Our heroic couple jump on the opportunity, but soon discover that the house has more problems than first meets the eye.  As the woodwork crumbles around them, so does their relationship, as not even love can withstand the stumble into the money pit.

It’s a depressing premise on the surface, a collapsing lemon of a house and a love that can’t stand the pressure, but it’s all done for laughs and there will be a happy ending, don”t worry; it’s the 80s, after all.  Tom Hanks was in the zone as Walter, the passionate and bumbling do-right who wants to please everyone but can’t seem to make it work.  Long is less solid, her career didn’t quite pan out, but it’s funny to see her as a “sexy leading lady”, she isn’t exactly the kind of woman you see cast in these roles today.  Neither is Hanks, but this was a strange era, and people found him charming; I guess they still do.  The film is pure fun from start to finish, never takes itself too seriously, and remains one of my childhood favorites.