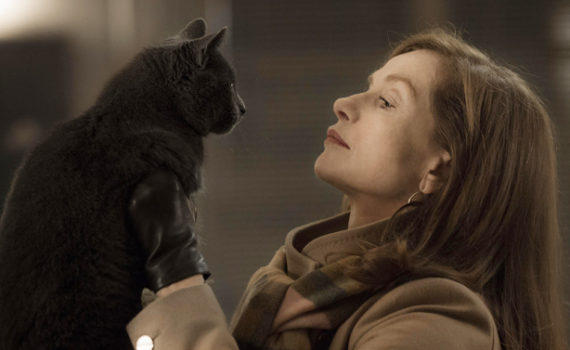 I recently saw a crappy film that I could tell would begin with a comedic, moan-ful sex scene, and sure enough it did.  Sex played for laughs to set the tone, I get it, but the end result was predictably predictable and basically not good.  When Elle began the same way, I thought, “great, here we go again, even foreign directors are doing it now.”  But it turns out she was being raped.  Now, that’s not giving anything away, the entire premise of this film is based on the main character attempting to discover who attacked her while also dealing with a variety of her own problems.  But it’s worth mentioning that a) Verhoeven was smart enough to fool us at the beginning, 2) the movie deals graphically with sexual assault, and blue) this story won’t be like much you’ve seen before, so hold on tight.

Michelle is raped in her own home by a masked man, and yet fears to report the incident to the police or even to her closest family or friends.  She’s a successful businesswoman who owns a video game company, a powerful and independent person who fights a constant battle to get her cake and eat it too.  The attack has left her unsteady but not defeated, and she begins a campaign to discover who the man was, what his motives were, and how she can punish him.  In the background is her daily life, the friends that she attempts to juggle, a son who can’t seem to make it on his own, lovers who she wants or wants to get rid of, and a gruesome past that still haunts her after all these years.

Elle is hard to describe; part usual thriller, part black comedy, part feminist metaphor, completely chaotic and surprising.  It’s unlike most of what you’ve seen before, and I’m not sure who the demographic is to whom I would recommend it.  Verhoeven is an eclectic director, with shocking films like Flesh + Blood, allegories like Starship Troopers, sexual thrillers like Basic Instinct, and solid mysteries like Black Book.  His latest film is his most twisted yet, but somehow still both funny and courageous.  Huppert was nominated for Best Actress for the role, and she deserves it, as periphery characters swerve around her but she stands out as the undisputed focal point.  Her performance is complicated and quite strange, but there’s a lot to respect within Michelle if you take the time to think her through, a lot to learn from this movie if you can get past the upsetting setting.