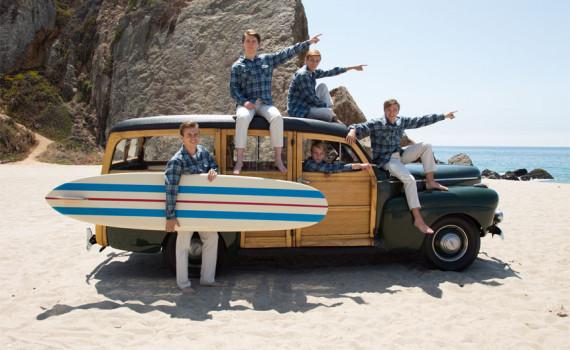 I grew up loving the Beach Boys.  Now, to that, 90% of people will respond with “oh yeah me too”, assuming that to love a band means that you just heard one of their songs and it reminded you that you once enjoyed another of their songs some undefined number of years ago.  No, I actually loved the Beach Boys, claimed them as my favorite band when I was 8 after I’d moved away from my California birthplace, still have my collection of cassette tapes, wore those thin in a Walkman while other kids were listening to New Kids, did reports on the guys in English class, playing Surfin’ to a reluctant audience of 13-year-olds.  Are they still my favorite band of all time?  Perhaps not, and I wouldn’t claim to be a Beach Boys historian, but this band has always been very special to me, and to a lot of others as well, I’m sure, inserting something in our brains that we’ll never forget.  Love & Mercy not only does this music that I love justice, but it captures the mind behind it in a way that perhaps no biography has ever done as well before.

Welcome to the weird world of Brian Wilson, the brains behind the Boys.  We shadow him through two different & difficult periods of his life, both indistinguishably out of control.  In the 60s, Brian took a hiatus from the traveling schedule of the band, staying behind in California to produce music, ultimately creating Pet Sounds, an album recognized as one of history’s best.  In the 80s, Brian attempts to create some sort of personal life for himself, having been marooned by his ex-wife & daughters, left in the care of a domineering therapist named Gene Landy.  And in both time periods, Brian battles the voices in his head that have started to distract him from every day life, the desire to take drugs as a way to cope, and the heavy hand of a father who literally beat his memory into his sons.  The musical genius that was Brian Wilson didn’t come without a price, and can’t be turned off, leaving the man to drown in his own thoughts, while the music that so many would come to love pushed its way violently to the surface.

Where to start, when a movie is this good?  The music perhaps, since its the best of Brian Wilson and the thing that he loves the most.  The way this film presented us with the making of Pet Sounds was extraordinary, allowing us access into a troubled mind but also letting us sit back & enjoy the original art that flowed from it.  The studio scenes were wonderful, bringing that time to life, showing us what that world was like, giving us the music in a way no record player could ever expect to deliver.  The Beach Boys had it all; a great, youthful beginning and a wise, game-changing sound, much like the Beatles, who they competed with at the time and will never escape comparison to.  The difference, perhaps, was Wilson, who couldn’t control his medium, who gave it all until he was empty, for reasons we should all hope that we never understand.

That was the magic of the film, its attempt to dive into Wilson’s brain & history, hoping to emerge with something that explains the insanity of his life.  Child abuse, drug abuse, mental disorders, a little bit of everything; this was a man who was troubled beyond what was normal, beyond being “touched”.  He was lost in so many ways, and this film does an amazing job in trying to find him.  John Cusack plays Wilson in the 80s, controlled by his therapist, alone with his money, afraid of everything, and delivers his best performance since Say Anything.  The same goes for Paul Dano as Wilson in the 60s, a character that’s among the best of his career.  Even Elizabeth Banks was tremendous, with Paul Giamatti rounding out the cast and becoming one the most believable & despicable villains ever played on screen.  The filmmakers took this cast, wove in wonderful music, transitioned between eras in a way that’s as well-edited as you’re ever likely to see, and created a movie that comes along once in a decade.  Love & Mercy is a biography, an exposè, a concert, a drama, a true story, and ultimately a perfect tribute.

Thanks for watching this again the other night, it is such a great movie!!