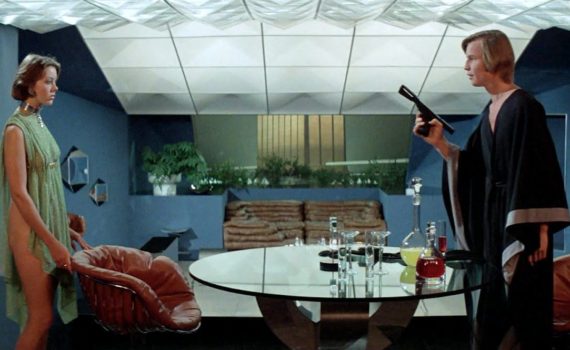 If you mix Planet of the Apes with a little Soylent Green, you’d get something like Logan’s Run, a movie that is a classic in its own right, but is basically a mix of other, better pictures.  Incidentally, Charlton Heston starred in both of the films that Logan’s Run strongly resembles, but I don’t think those were the only two it lifted from.  It is based on a sci-fi novel by the same name, written in 1967, so credit the author with some original ideas I’m sure, but there’s no doubt that the movie version knew what audiences were looking for and tried to deliver what they had already seen.  A little Barbarella, a little THX 1138; I don’t blame the director for borrowing a bit, but he might have crossed the line.

In the future, war and famine have ripped the civilizations of Earth apart, leaving mostly wasteland and the ever-lapping seas.  Humans have huddled under giant dome cities, where they let machines take care of their every need.  They can play, relax, make love; basically spend their days enjoying the perfection that is their climate-controlled bubble.  The only catch; at the age of 30 you enter the Carousel, where your corporal body is destroyed but your soul is renewed in the eventual creation of a test tube child, the number of people in the city kept at an exact, sustainable level.  Logan 5, a Sandman, is one of the only denizens to have a job, although he loves his work.  He must terminate any Runner, someone who can’t face his or her fate when their 30 years is up.  But when Logan’s years run out faster than expected, he becomes a Runner himself, and must rely on the aid of the beautiful Jessica 6 in order to survive.

I’ve not read the book, but I did check out a summary, and the movie seems to stick to the plot fairly well, until the end anyway.  It’s a cool, dystopic setting; the city, the young people, the frivolous life, the eventual death.  Again, it’s not really a new idea, but I’m always up for a little 60s/70s sci-fi, especially when its trippy and sexy and silly and dated.  Logan’s Run definitely fits that category, with a nonsensical story that you don’t kind and diaphanous robes galore.  Michael York is such a fascinating actor, or over-actor, as it were, but sometimes he just fits, as he does in The Island of Dr. Moreau, one of my personal favorites.  Jenny Agutter I had never seen before, but wow was she attractive, with legs for days and a killer accent.  This film might not be the cult gem that I had though it would be, or at least I might not think it deserves the title, but it’s still a solid genre & era flick, something to enjoy for the exact reasons you go in expecting.