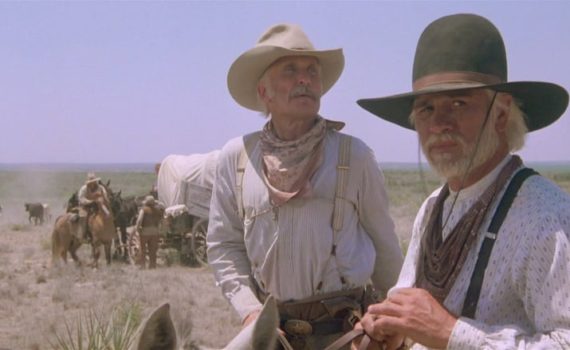 Lonesome Dove is exactly 6 hours & 24 minutes long and worth exactly every second of it.  There are credits before and after all four segments, and I wouldn’t even skip those, they’re just another chance to bask in the glory of the iconic soundtrack.  Point is, it doesn’t matter how long, how drawn, how Western something is, if it’s great it’s great.  And this classic mini-series is the epitome of excellence, a made-for-TV experience that is better than almost every film I have ever seen.  I grew up on these characters, I semi-recently enjoyed the book, and I’m always up for watching again, no matter how many times I’ve seen it before.  That’s the thing about perfection; it tends to stay perfect.

Former Texan Rangers Gus McCrae & Woodrow Call are getting tired of the boring, safe, quiet life, now that they’ve run all the Indian natives and Mexican bandits out of the territory and there’s no one for them to protect.  They jump across the Rio Grande some nights, steal horses and cattle, it’s fun, but it’s not the adventure that they are used to.  So when their old running mate Jake Spoon shows up and tells them about this territory called Montana, which he describes as a cattleman’s paradise, they jump at the opportunity to hit the trail.  The journey will take many months and many lives, but once these stubborn men set their minds on a thing, they have to have it, no matter the cost.

There is no better Western, book or movie, than Lonesome Dove.  It’s not the tale of the tiny town and the outlaws and the sheriff and the unrequited love and the old mine and the posse; I love that tale, but this isn’t it.  Here we have the lesser-told cowboy story; the trail, the steers, the gunfights, the lighting storms, the loves along the way.  It’s a powerful and epic drama, set in a time that still fascinates us, and I don’t think the backdrop or this particular telling will ever get old.  The characters are where the magic lays, in each individual that adds to the quest and in each body that they bury along the way.  And these actors; have you seen the cast list?  Duvall, Jones, Danny Glover, Diane Lane, Robert Urich, D.B. Sweeney, Ricky Schroder (my favorite), Anjelica Huston (surprisingly, the only weak performance), Chris Cooper, Barry Corbin, William Sanderson, Barry Tubb (from Top Gun), Steve Buscemi; wow.  Add in an amazing score, one of the best ever, and there isn’t a weak link in the 384 minutes.  Lonesome Dove was nominated for four Golden Globes and nineteen Emmys, I think it could have won Oscars had it been eligible (although some films from that year were Dead Poet’s Society, Field of Dreams, Born on the Fourth of July, When Harry Met Sally, My Left Foot, Driving Miss Daisy, Last Crusade, The Abyss, so I don’t know), and I hope critics don’t pass it by as one of the best cinematic achievements of the last 50 years, because it really is that special.