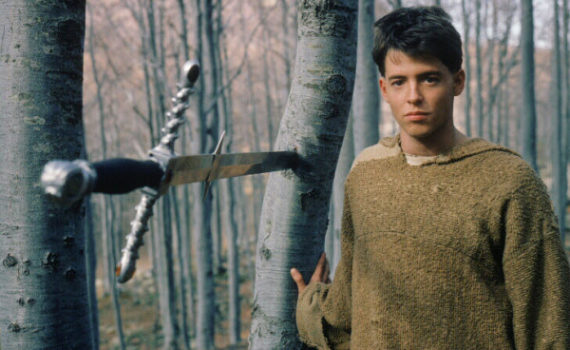 Not to be confused with Lady Bird, Ladyhawke is the exact antithesis of that phenomenal film in every single way.  First and foremost, because it’s awful, and that’s really all you need to know about it, but I’ll dither along anyway, why not.  It’s 80s fantasy, it’s Ferris Bueller, it’s pseudo-comedy, and it’s bad; you’ve been warned.  Ladyhawke might actually be one of the worst 80s movies I’ve ever seen, and that’s saying something, not because I’ve seen so many (which I have), but because that was a decade to experiment, to make goofy cinema, to explore, to cast Matthew Broderick in everything.  He’s so darned cute, but even he couldn’t save the day, and the resulting feature film is more something you’d make up in your garage to kill time than something any sane person would ever think belonged on screen.

Young thief Phillipe Gaston, aka the Mouse, has tested his luck one too many times and now finds himself in the dungeons of Aquila, a city ruled by an evil and all-powerful Bishop.  Through cunning, and with a little help from God perhaps, he escapes, only to be hunted down by the Bishop’s men.  But again the sun shines of Phillipe, as he is rescued by none other than Captain Navarre himself, a disgraced but awesome knight.  He wants the Mouse’s help in getting past the gates of Aquila, since Gaston is the only man who has escaped and lived to tell the take.  Navarre travels with a hawk who is not all she appears to be, both of the strange companions cursed by a dark spell that they seek to reverse by killing the Bishop in his own cathedral.

I will always love Matthew Broderick for Ferris Bueller, but I’m sorry I watched him in Ladyhawke.  This actually came out a year before, when he was famous from War Games (John Wood was a good guy that time) but had yet to team up with John Hughes, but you can see the natural charisma that 80s directors loved; it just didn’t work in medieval France.  Hauer didn’t work either (he was coming off Blade Runner), neither did Pfeiffer (she was a hottie on TV at the time), and it seems like all Donner did was grab up chic items without wondering how they would work together or if they had any real acting skill at all.  You’d think he’d know better, he’s been around the block: The Omen, Superman, The Goonies came out the same year, Lethal Weapon & Scrooged a few years later.  Maybe this just isn’t his genre, because nothing went right.  The dialogue is dumb, the action is ridiculous, the story it throwaway, the music is cheesy; I understand cult classics, but I have no idea how/why this is one.