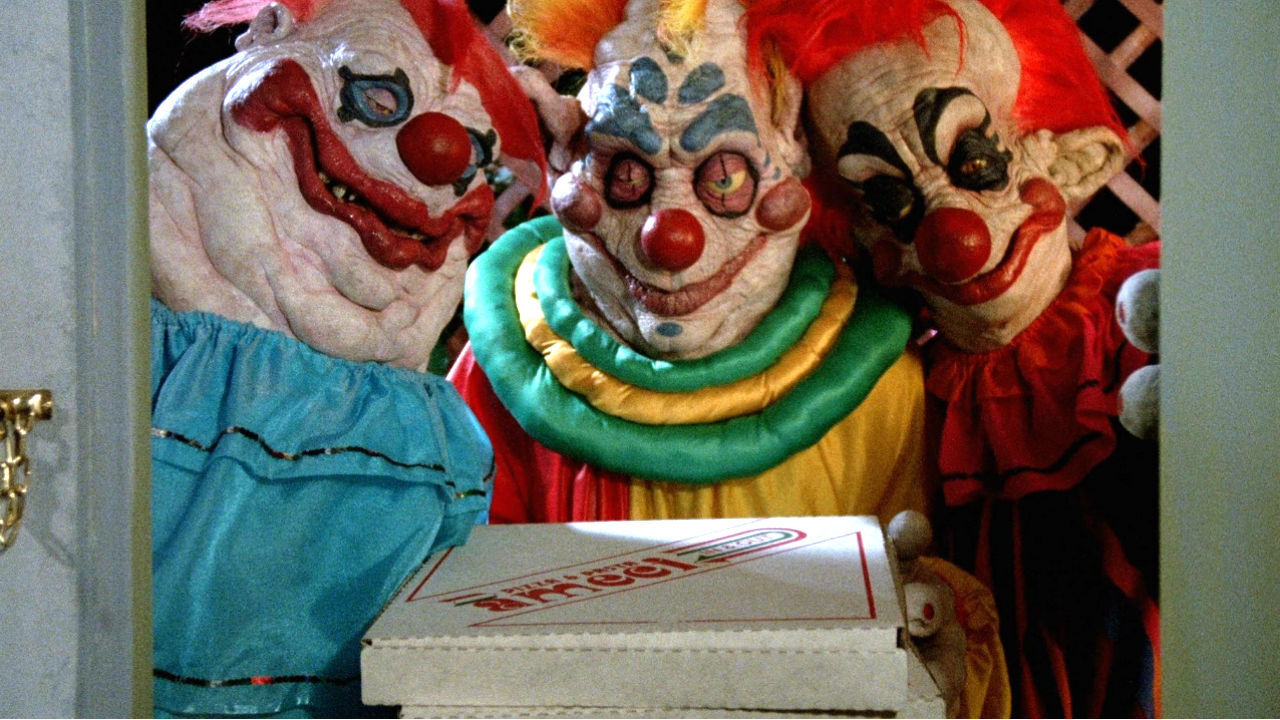 If you’re a believer in the value of a best/worst movie, a b-flick that’s so god-awful it’s amazing at the same time, then welcome to the wacky world of Killer Klowns.  This film, if it can be called that, is so utterly devoid of anything remotely resembling cinema that it becomes almost anti-enjoyment, while somehow circling around to premier entertainment as well, like an evil snake biting its own poison tail.  Words can’t express how dumb Killer Klowns from Outer Space is, how bizarrely pointless and insulting, BUT, paradoxically, how wildly fun.  It takes a special kind of stupid to like this movie, but that’s kinda where I’m at, although I’ll also give it the lowest rating I possibly can, because, well, I’m not completely insane.

The residents of Crescent Cove are about to be visited by aliens, which isn’t the weirdest part of this story.  The aliens look like clowns, like giant, mutated, over-exaggerated clowns, and they’re out to collect humans and put them in cotton candy pods, which is just plain bizarre.  Mike & Debbie, making out up at the point, stumble across the visitors when they go searching for what they thought was a shooting star, only to find a big top tent in the middle of the woods and a bunch of dead people already wrapped up inside.  They go to the local cops, but of course no one believes them, at least until the Klowns start blasting everyone in town and turning them into goo for their own food and/or amusement.

I’m not even sure where to start; Killer Klowns from Outer Space deserves a spot in the Wack-a-doo Hall of Fame.  It’s nutty, it’s nonsensical, it’s ludicrous and insulting, it’s nightmarishly bad; there’s no reason to watch this at all, literally at all.  It’s not really a movie it’s more like a skit, but with Klowns and the world’s worst actors.  How it ever got made is beyond me, but here we are, and now I can say I’ve seen it.  At the same time, there’s something fun about watching the stupidest thing ever made, so if you’re a glutton for punishment or, like, high, you might have the time of your life checking it out.  I sure had fun, I thought it was pretty hilarious, while also knowing as a stone cold fact that it’s rock solid shit.  So I will give it as few stars as possible, but also look back on the 80 minutes it took away from my life as 80 minutes festively, if not exactly well, spent.