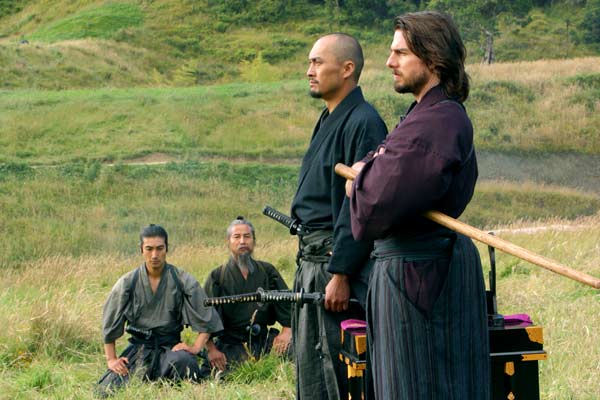 Looking back, it would be easy to drag The Last Samurai for being a bit toneless, but comparing what Tom Cruise did to what Scarlett Johansson continues to do makes the film seem absolutely guilt-free.  At first glance, this is a Hollywood attempt to put an American in a Japanese role, to make white samurai because audiences are dumb, to give us watered down, ridiculous, Matt Damon on the Great Wall of China detritus that we’ll think is fun despite its stupidity.  But I’m here to shout this movie’s praises, because it is anything but white-washed drama and cultural appropriation.  I know I can’t be the best judge of that, I know my privilege will always get in the way, but I’ve been a fan of Last Samurai since its genesis, have watched it half a dozen times, and really appreciate the way that it gives us a standard plot with an artistic flair, while trying its best to be more Dances with Wolves than Prince of Persia.

Nathan Algren is an American West war hero known for his brutal talent in pacifying native tribes, a reputation that haunts him and leads him to drown his memories in drink.  He simply wants to forget the atrocities that he’s been a part of, but the US Army wants him back in the saddle again, this time in Imperial Japan.  The government there is encountering a problem very similar to the one that Algren so efficiently dispatched; modern technology is attempting to destroy natural history and natural history is fighting back.  The samurai, one leader in particular named Katsumoto, are refusing to allow the Emperor to spread his railroads and Western habits across the land, literally attacking greedy progress in an attempt to protect the soul of Japan.  Algren must train the Emperor’s armies and lead them in killing the samurai, for which he will be well-paid, but after which he might never be able to look at his own face in the mirror again.  When he is captured by Katsumoto, Algren is given the rare chance to review his own decisions, to choose the right side, and to come away a better man. This film really is more Dances with Wolves than something like Exodus: Gods and Kings, and that’s highly to its credit.  The base for the story comes from actual history, advisors did this in China around this time, they just weren’t American, but that’s the extent of the make believe; Eastern lords really did hire Western experts to try to force their countries and their peoples to be “modern”.  I’ll never understand that, it’s so strange and sad, but it happened, and here’s a fictional look at how it might have gone down.  Obviously the capture, the budding friendship, the potential romance, all that is just Hollywood theatrics, but so what, who says you can’t blend history with drama, it happens all the time.  What I’m saying is that, even from a more modern perspective, this film isn’t an insensitive money grab, the worst that can be said of it is that it romanticizes the Japanese and the samurai, much like emotional Westerns often romanticize the American Indian.

Last Samurai is a fine balance of history, melodrama, action, and heart, with solid acting and a memorable feel.  It boasts great performances, great music, great fight scenes; honestly I’m not sure how we don’t respect this film more, somewhere above The Patriot and below Braveheart.  Edward Zwick knew what he was doing in creating something familiar and easy to watch, but still unique enough to be entertained by, and his early work shows his true talent: Glory, Legends of the Fall, Courage Under Fire.  Cruise is perfect for this part, I’m honestly a big fan, Watanabe is wonderful, the quiet romance with Koyuki is lovely, the samurai at the village will become your heroes, and the ending will break your heart; what more could you ask for from an epic adventure set in the Land of the Rising Sun and molded this cleverly into something that we’re hard-wired to love.