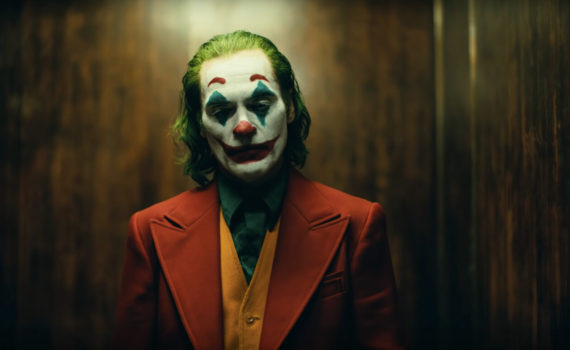 While I don’t want to be a part of inventing a controversy surrounding a film, I do feel that I have to mention Joker‘s inherent violence, and the chance that it could be sending an unintended message of support to those looking for violent options.  No, movies and video games don’t kill people, yes, art is open expression, I’m not calling for censorship here, and I’m not claiming that Phillips had any negative intentions when he created a film about a villain who subtlety becomes a hero.  I like my bad guys to have back stories, it makes them human, and the lessons about mental illnesses to be learned here are both important and severe, so don’t label me as someone saying “don’t see Joker, it’ll make kids shoot up their schools”.  I just want to mention that, with some of those concerns in mind, I did notice times when I felt uncomfortable, like the boundary behind responsible storytelling had been crossed, and we might be laughing when there’s nothing funny going on.  But you know what, perhaps that’s exactly what Phillips & Phoenix had in mind, and their movie made quite the impression on me, so perhaps they did their jobs exquisitely.  I can’t make the call on whether Joker is appropriate or not, that’s bigger than me; all I can say is, controversy aside, this is fantastic cinema.

Arthur Fleck lives with his mother in Gotham City and works as a clown.  That’s right, a clown, making a variety of appearances around town and supporting his mom in a city that’s slowly sinking into crime and decay.  He’s supremely unhappy, has a severe head injury, laughs at strange times as a result, takes multiple medications for his condition/mental health/depression, has needed hospital stays, and is ultimately fired from his job, which results in an even tighter spiral toward rock bottom.  He dreams of being a stand-up comedian, but basically stinks, and he also can’t talk to women, can’t be friends with other people, can’t stand himself; life as Arthur Fleck is unbearable and becoming more so with each passing, miserable day.  When he finally snaps and kills three men on a subway, Arthur unleashes within himself a violence that surprisingly makes him feel alive, and Gotham City responds with a mob movement that buoys him up in a way he’s never felt before.  Arthur is awake for the first time, and he wants to be called by a new name, to match his new amused outlook on life; Joker. So I touched on the controversy, and I don’t think it should be taken lightly; I can say that I felt slightly more nervous in the theatre watching this film than I have ever felt before.  I’m sure that’s silly, I’m sure that’s feeding into what’s probably just hysteria, but that’s a fact, I felt that, and I do think that this movie paints a twisted character in a new, more positive, more understanding light.  Again, not for me to say go or don’t go, feel this way or don’t, but I hope concerns aren’t pushed flippantly away, because I think they are legitimate.  As are opinions that Joker peels too much from the surface of others that have come before, Scorcese for sure, but others as well; it might have an originality problem that’s very real.  That’s a concern but not a warning; films borrow from other films, directors copy off other directors, it’s just the truth, we deal with it.  But you can perhaps see that Joker isn’t perfect, it has problems, it will have its critics, and I think a lot of that is warranted.  But ultimately, none of it stopped me from appreciated the positives, and from thinking that what I just saw, whole package taken in all at once, was one of the best I’d seen all year.

I hate to keep being dramatic, cutting down the film and then saying “but”, BUT it’s that type of experience.  When your main character has gone mad you’ll have some of that I guess, and the outside noise amplifies it all, making Joker an extremely loud and chaotic experience.  I still liked it though, really liked it, and here’s why.  I thought the progression of Arthur into Joker was really well-handled, not too fast and not too slow.  We get to see him coming apart at the seams, trying desperately to hold himself together, but losing control bit by bit.  Joaquin Phoenix could not possibly have been better, could not have given us more, and that final scene is one that will haunt me, in a very good way.  I liked the link to the history and content of the comic books, but I also liked that it was a little ambiguous, not a companion piece to a DC flick, nothing like that, but rather a reimagining with enough material we’re familiar with to keep audiences happy.  The side characters were strong, the music was great, the darkness was so enthralling, and I was riveted  for sure, that term has perhaps never been applied so well.  Joker is absolutely one of the best films of 2018; not a masterpiece, not a game-changer, but definitely a deep impact on our senses and a movie that we won’t soon forget.