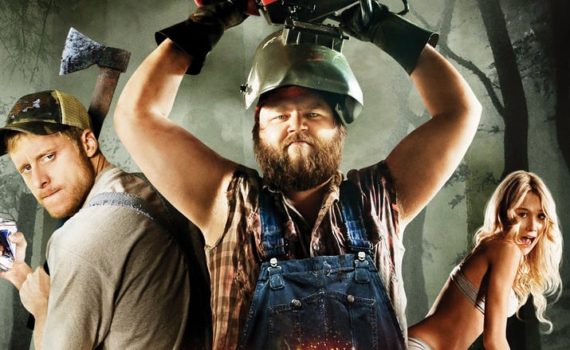 Eli Craig has directed Tucker and Dale and Little Evil, that’s it, and while both are OK, neither is good enough to launch him onto the next level; maybe the comedy/horror genre is just to niche.  Craig knows how to get the laughs, knows how to capture the deaths, but that’s only worth so much, and such is the case with this film; it has a very low ceiling.  It’s a bit Zombieland, a bit Cabin in the Woods, but not as big a deal as either, falling somewhere in the middle and never letting audiences settle into the style, whatever style that might be.  It’s clever, that’s for sure, and sometimes funny, but a little weak in both areas, resulting in a little fun but also too little impact.

Tucker and Dale are just two simple West by god Virginia hillbillies trying to enjoy a little man time in the woods, fixing up a vacation home they recently purchased and spending quality days together as best friends forever.  But trouble comes along in the form of a group of college kids who set up camp nearby, drinking beer and skinny dipping and raising a ruckus.  The problem isn’t that they’re too loud, the problem is that they keep dying one by one, and they think that the mountain men next door are the killers.  Tucker and Dale wouldn’t hurt a fly, but now they’ve got to protect themselves from a group of bloodthirsty, revenge-seeking 20-year-olds; there goes a pleasant weekend.

It’s a cool concept and a funny story board, the tables being turned this way and our hearts going out to the poor saps who might be rough around the edges but are surely lovers, not fighters.  The kids become the crazy ones, and keep accidentally dying to boot, which is entertaining, at least for a while.  That might be the main problem with this movie; it’s only a good time for a while.  It gets more and more ridiculous, and the acting never peaks at any respectable level, so we’re only left with a baseline of enjoyable comedy, nothing we can really go tell our friends about.  Labine & Tudyk are amusing, Bowden is pretty alright, the rest of the college kids are forgettable, and the “twists” are just plain unnecessary.  So is the film I guess, not that I disliked it at all; it just isn’t worth much of our attention, even while it’s mostly a good time.