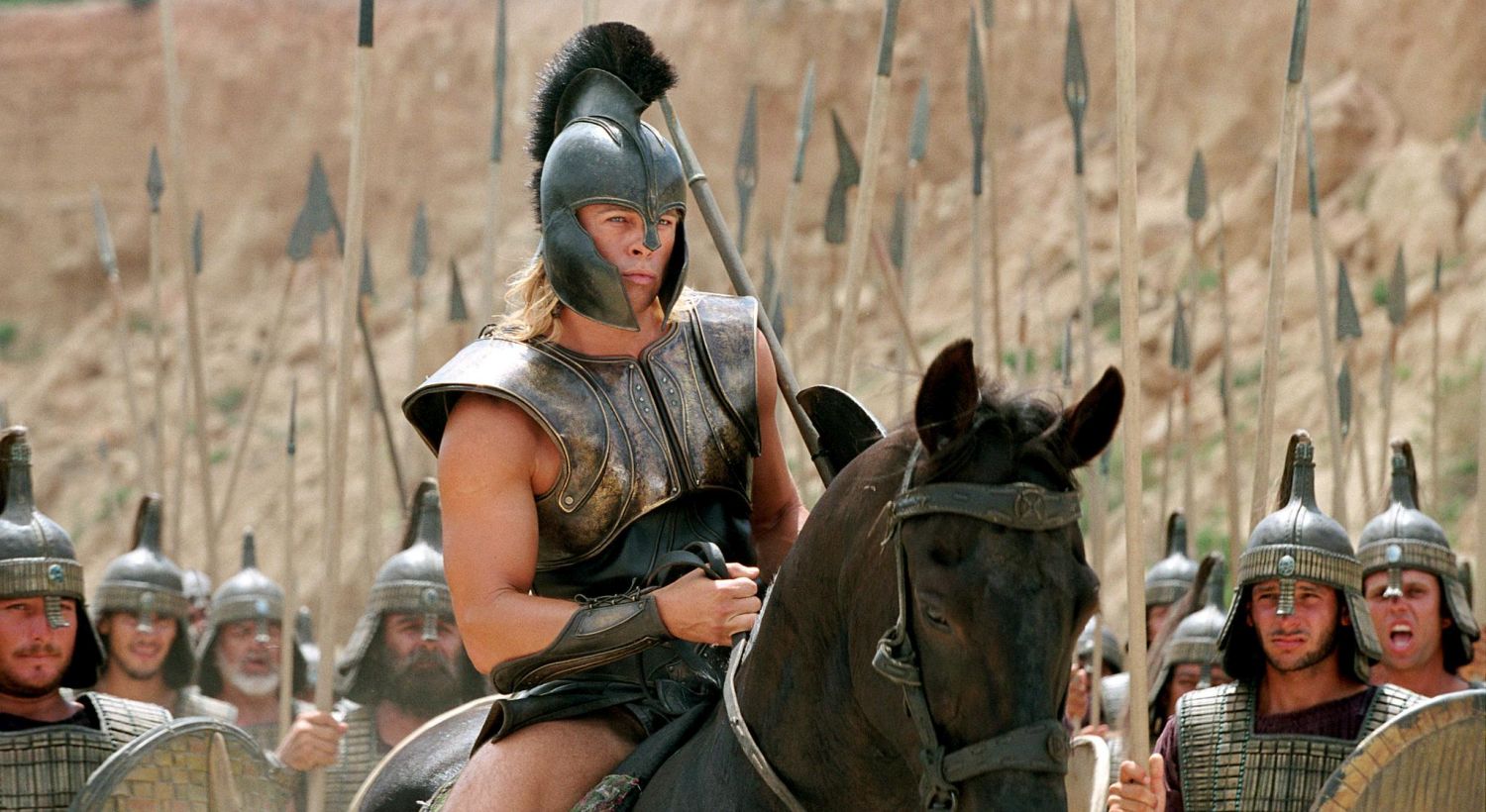 Wolfgang Petersen is the Americana German, if that’s a term he wouldn’t mind; his films are some of Hollywood’s most pivotal pillars.  Das Boot, The NeverEnding Story, Enemy Mine, In the Line of Fire, Outbreak, Air Force One, The Perfect Storm, Troy, Poseidon; we owe some classics to Mr. Petersen, and don’t you forget it.  Among them is a movie that I think is wrongly maligned by critics for its length and lack of central figure, which, contrarily, I think are two reasons why Troy is so damned good.  It’s an epic, it’s a study, it’s a tale from two sides, it’s a showcase of, if not exactly talent, then likeable faces, and that’s all fine by me.  I want more, not less, of this layered war drama, and I also don’t mind when things get cheesy & fun; since when was watching Greeks do battle in the sand a bad thing?  Bring on the cliche and armor, boys, I’m ready to watch and applaud.

Homer told us the tale, archeology gives us some hints, but you’ve never seen The Iliad brought to life quite like this, so hold on to your butts.  Greece is now a united empire made up of city states, ruled by the bloody overlord Agamemnon.  He’s conquered most everyone into submission, except the distant city of Troy, and, while that eats at him, his brother Menelaus feasts in peace with the Trojan princes: the stolid Hector and his Casanovic brother Paris.  But here’s where things get tricky; Paris falls in love with Menelaus’ wife Helen, the two abscond, Hector is furious, and now Agamemnon has the last, great war he’s been dreaming of, so he drives his disrespected brother and the rest of the King’s of Greece into war.  By his side, kind of, is Achilles, the greatest warrior of all time, who men say can’t be killed.  Which will soon be put to the test, as the largest army ever to be assembled sets sail for Troy, and the rest, as they say, is history.

Troy is a weird & wonderful example of the times and a beginning-of-the-summer blockbuster the likes of which we haven’t seen for some time.  It’s huge, it’s violent, it’s star-studded, it’s color-coordinated; do I really have to continue listing reasons you should love this movie?  Plus, Brad Pitt is blonde and brooding, there’s all the reason you need right there, and somehow that’s also what makes the film silly; it’s a complicated relationship we’ve got going on here.  In all seriousness, there are way more pieces to like than to despise here, and I don’t understand where critics are coming from when they spout off about this film; it’s so much better than so many others that have attempted to harness the same genre.  The action is cool, the story is classic, they do a good job balancing humanity and divine intervention.  And consider the cast; Pitt, Bana, Bloom, Brian Cox, Brendan Gleeson, Diane Kruger, Rose Byrne, Julian Glover, Peter O’Toole, Sean Bean, Garrett Hedlund, a couple large guys from X-Men and Mad Max.  Perhaps that’s overkill, so is the movie I guess, but in a good way, with all the theme music and spear stabbing you could wish for piled on top, until you will happily suffocate under the embarrassment of riches.  Troy is larger than life and that’s why I like it, with great quotes and memorable moments throughout, a spectacle if any has ever earned the term, and that’s what makes it fantastic.