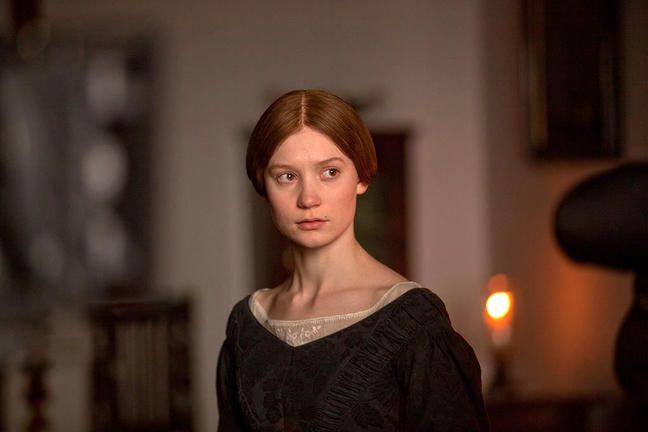 It takes a certain type of leading lady to pull off a good period piece, especially one with the weight and popularity of Jane Eyre.  Keira Knightley knows the business, and she’s probably the most well-known period actress, but Mia Wasikowska is giving her a run for her money as the former ages out of a lot of classic roles.  Wasikowska isn’t a giant name, but you’ve seen her around, and in certain moments she’s actually quite outstanding.  The Kids Are All Right, Alice in Wonderland, Jane Eyre, Albert Nobbs, Lawless, Stoker, Tracks, The Double, Maps to the Stars, Madame Bovary, Crimson Peak; she’s building quite the filmography, and for a girl who just turned 27, her entire promising career stretches out before her like a red carpet, awaiting more successes like this one.

Based on the Charlotte Bronte novel of the same name, Jane Eyre is the story of a young woman trapped in a man’s world, a bird in a cage that she cannot escape, one that holds her away from the beauty that might be waiting for her right outside its doors.  At an early age, Jane was sent away to boarding school, taught to be a proper lady, and beaten at any hint of insubordination.  As a young woman, Jane would move into the house of Edward Fairfax Rochester, a wealthy man who is very rarely at home, in order to look after his little ward, a girl named Adele.  There, Jane would begin to discover the joys of emotions, the desires of men, and the secrets they hide so very well.

The amount of talent in small roles in this film might be just as impressive as the leads.  Judy Dench, Jamie Bell, Holliday Granger, Craig Roberts, Sally Hawkins, Imogen Poots; all did well in smaller parts, all fleshing out a somber story.  Meanwhile, Wasikowska & Fassbender were tremendous as Jane & Edward, bringing the period to life perfectly, while bringing their talents to the foreground at the same time.  Wasikowska can be a bit cold, but she was excellent here, especially aided by Fassbender’s amazing ability, something that shines in every film he appears in.  Having not read the book, the story was a surprise to me, both traditionally romantic but also sinister in a highly enjoyable way.  It’s a plot that’s both classic and entertaining, something that has been done before, but probably never done better.