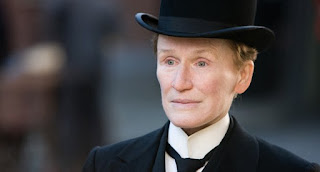 There exists an uncomfortable balancing point when it comes to film expectations: you want to be surprised, but you want to know what’s coming.  In the case of Albert Nobbs, I thought I knew what the movie would be about.  When it turned out that I was wrong, I wasn’t especially happy about it.
The title character Nobbs is a waiter in a 19th century hotel in Dublin.  He is respected and frugal, planning on someday getting married and opening up an idyllic shop where he will spend the rest of his days.  The trouble is, Albert is a woman.  As he attempts to make his dreams come true, he must come to terms with who he was and how that will effect who he can become.
Now, the fact that the main character is actually a woman is not the surprise, nor is it the problem.  Glenn Close plays Albert to perfection and the supporting actors are more than capable of keeping the storyline going.  The problem is that what starts as a brilliantly edgy character movie begins to slowly drag and become bogged down in issues, not individuals.  We are left with a commentary on the history of feminism and sexism, without ever really getting to know Nobbs in the way that could have been extremely fascinating.  I thought I would be watching a great story, and when I got a documentarial period piece, I was disappointed.

Three stars hits it right for this one. Good enough to watch and feel OK about but not living up to it’s potential. After thinking about it for a couple days I would say it was worth watching.

Definitely worth the watch, but you’re right, it’s just good enough, not great.