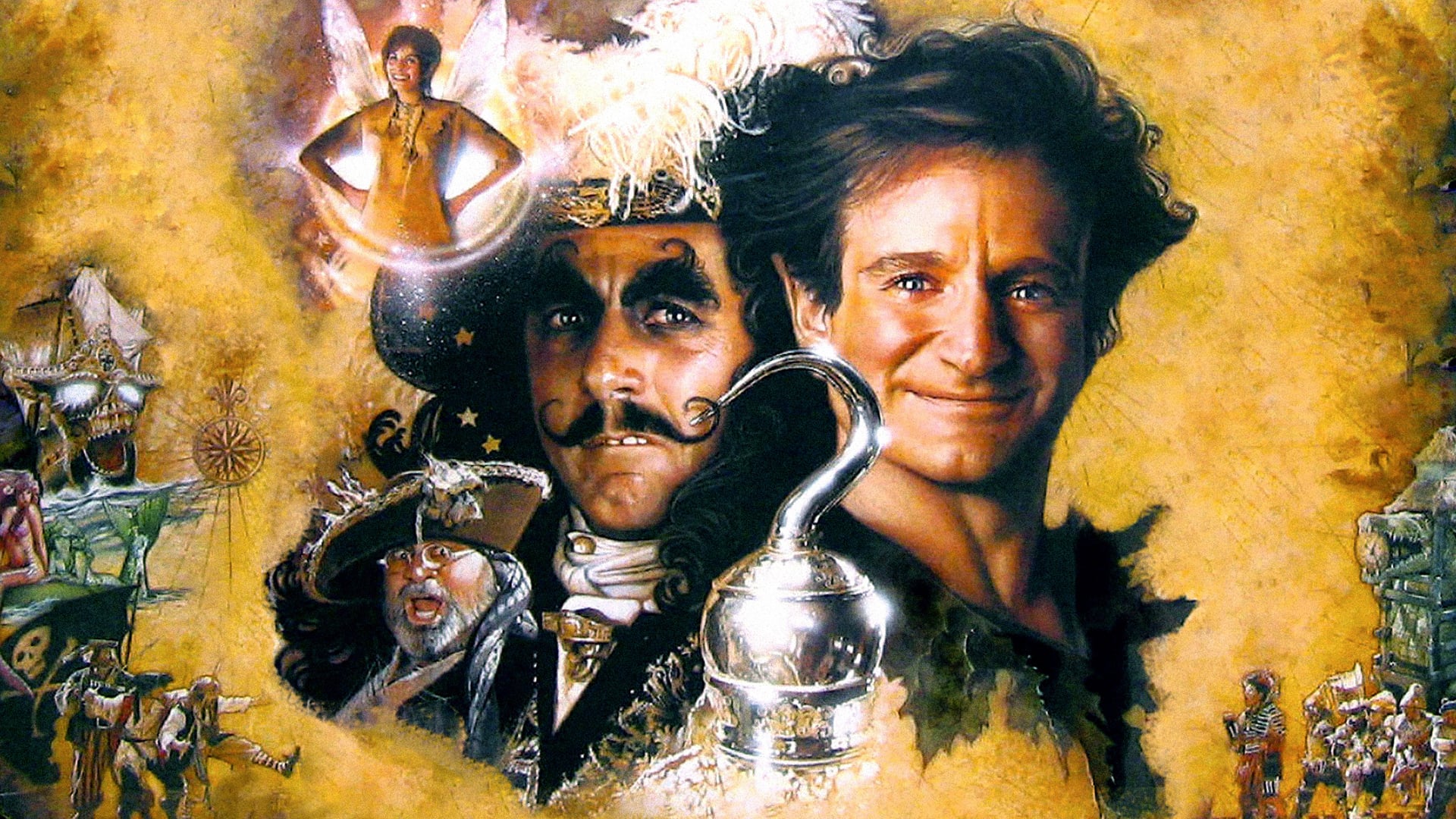 Hook might be an odd choice for one of the greatest movies ever made, but I think that might be exactly what it is.  It’s been almost 30 years since its release, but this adventure is still one of the biggest, brightest, most ridiculous, and most imaginative projects ever bravely undertaken; the resulting film is a kind of masterpiece that can only truly be experienced by the young and young-at-heart, those who are willing to immerse themselves in the emotions of a faraway world that somehow closely resembles our own and brings our own troubles to life in vivid color.  Spielberg is a genius, we all know that, but what he was able to do with a tale that has existed for more than a hundred years, that has been remade hundreds of times, is truly remarkable, as is Hook, the movie that moved mountains and captured the dreaming souls of so many.

Peter Banning is a high-priced corporate lawyer who does big deals daily and doesn’t have time for any distractions.  Sadly, that includes his family; wife Moira, daughter Maggie, and son Jack, who just wants his dad to be at his baseball games.  The entire family takes a vacation to London though (Peter attached to his mobile phone all the way) because there’s a very special woman there receiving some well-deserved recognition.  Peter and Moira were both orphans raised by the venerable Granny Wendy, who made it her life’s goal to save all the lost boys and girls who came her way.  But on the very night of Wendy’s big party, while the adults are away, Jack and Maggie are kidnapped right through their nursery window, and by one of the most evil men ever to walk the surface of any world; Captain James Hook.  Peter, who doesn’t believe in fairy tales, also doesn’t believe that magic could have whisked his kids away, not that it matters; he’s got to save them anyway, and his first stop must be Neverland, where there was once another Peter who, it is believed, will return to his homeland someday.

I started telling my kids who all was involved in this movie and I started geeking out: Steven Spielberg, John Williams, Robin Williams, Dustin Hoffman, Julia Roberts, Bob Hoskins, Maggie Smith, Gwyneth Paltrow, that kid from What About Bob, that girl who never did anything again, and a bunch of cameos you won’t notice, including Phil Collins, David Crosby, Glenn Close, Jimmy Buffett, Carrie Fisher, and George Lucas.  It’s wild that this movie even exists, it’s so out-there and befuddled, so fantastically insane, but thank god that it does.  The direction is awesome, the music is phenomenal, the characters are perfect, and there were so many times I choked up I can’t even count them.  The dad issues got to me, Robin being gone still hurts, the story is just to wonderful, and just so full of magical memories: Rufio, Thud, the food fight, the baseball game, how well they honored the play, how surprisingly creepy the abduction is.  Julia Roberts may constantly suck, it was hilarious to see Gwyneth Paltrow and hear her try to do an English accent, but I think everything else may have worked to perfection, because I came away completely immersed in that imaginative land and sublimely entertained by everything I had seen.  A gem that only grows brighter with time, Hook may be underrated but it is a classic that will never go unloved.