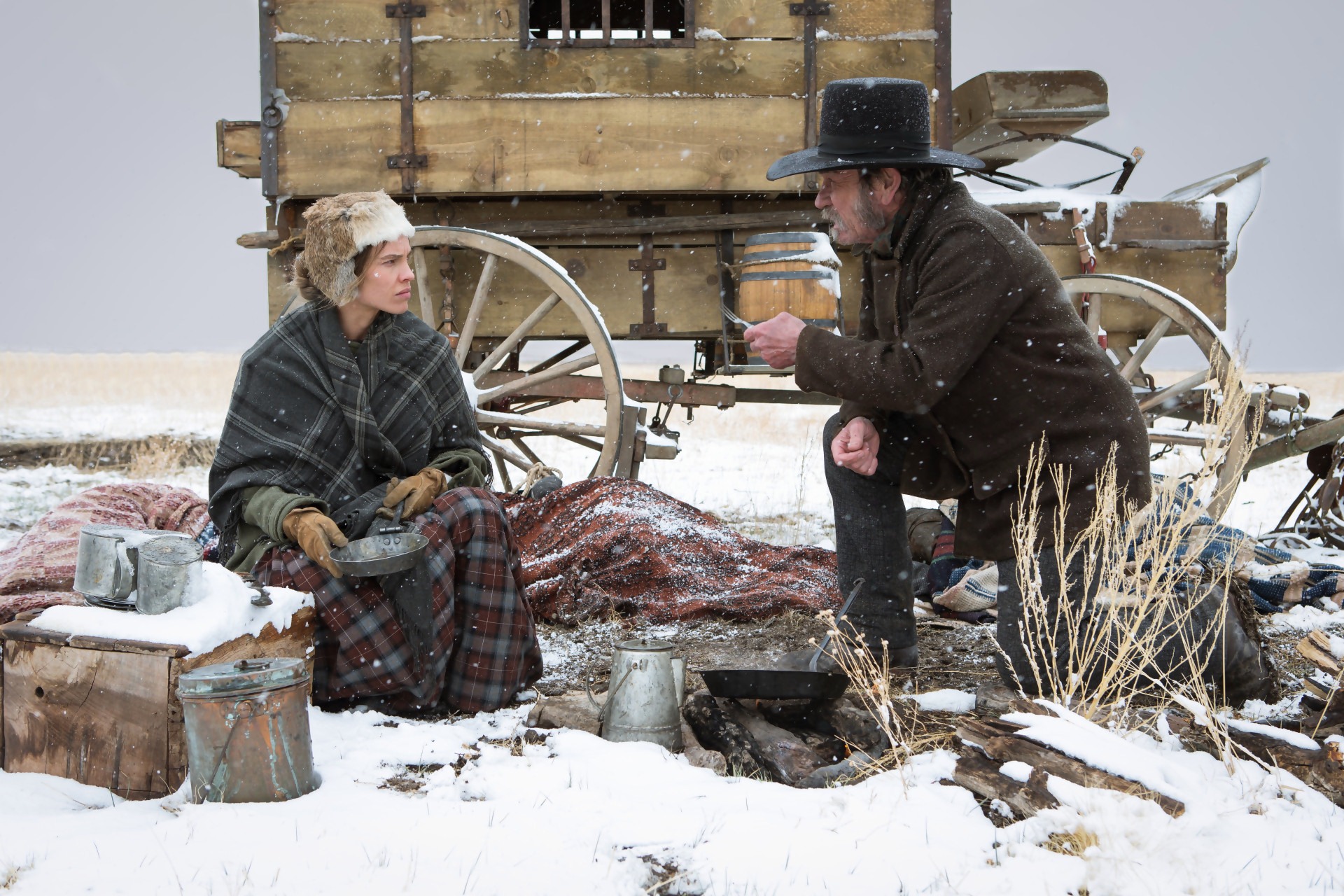 Tommy Lee Jones isn’t a director.  He’s not a writer either.  But he tries his hand at both in The Homesman, starring as well by the by, taking the film fully on his shoulders in every way.  Jones will always be Woodrow F. Call in my book, as Lonesome Dove is my favorite western of all time.  He’ll never be able to top that, but he’ll also always have that in his repertoire, so I guess it’s both good & bad that he had such an iconic role.  This film is a western as well, though on a totally separate scale from Lonesome Dove, focusing on women more than men, centering itself on one short journey.  Jones knows this genre, even if he doesn’t have much experience in screenwriting and filmmaking, and he made one very smart choice in what was otherwise a bit of a one note film; he cast Hilary Swank as a plain-Jane sodbuster who no one wants to marry.  Not only does she fit the part, but she has the talent to carry the role wherever the story might take it.  So at least one of Jones’ choices was clear & correct; too bad the majority of the movie wasn’t treated the same way.

In frontier Nebraska during the days of the pioneer, life is hard.  Towns spring up wherever people stop their wagons long enough to make a claim, farming the land is more than full-time work, and even the best laid plans can be destroyed by the whim of Mother Nature.  For three women in one small town, the limit that a person can stand has been reached.  Each of the three have lost their minds in the face of despair too great to bare; the loss of children or of a future or of love.  They can no longer support their families and so must be sent back East to their kin.  A local oddly single woman, Mary Bee Cutty, takes the task upon herself and sets out to ride the five weeks to the nearest Eastern city where a church will take in the women and see them safely home.  But she can’t do all the work alone, and so coerces a no-account man to join her party, a claim-jumper and ruffian who calls himself George Briggs.  Mary & George begin a treacherous journey through wild country, learning about each other and themselves along the way.

The Homesman began as a story about a woman, despite the name.  Hilary Swank as Mary Bee was a lonely, homely, determined, hard-worker who did what was right and let no man stand in her way.  I liked the direction the story was taking, a female perspective on the Wild West, and I applauded Tommy Lee Jones for knowing what to make his movie about.  But as the film progressed, it began to be more about George Briggs, about redemption, anger, survival, and it lost the positive buildup it had worked so hard for.  It’s not that I dislike Jones, it’s that the story became over-dramatic.  The “crazy” women who coincidentally all came from the same town, all lost their minds at the same time, and all refuse to move themselves.  The old cowboy who’s not as happy being alone as he might project.  The strong woman who’s really just a girl at heart.  Somewhere along the line these became the focal points, when they were the weakest parts of the film.  The cinematography, the side characters (John Lithgow, James Spader, Tim Blake Nelson, Meryl Streep, Hailee Steinfeld, Barry Corbin), the music, the scenery, the mood; those were the strong points of the film and the things deserving of attention.  And so The Homesman became a movie about bad choices perhaps, rather than a lack of talent.

I rarely care for movies when the star actor takes on the directing role. You never see a director staring in his own films (he is smart enough to cast the absolute best in that role and realize that he isn’t it!). I understand the want to try something new and get behind the camera, but then why the need to be in front of the camera as well?

I don’t know, maybe I’ll feel differently when the my book’s movie rights sell *big smile* I’ll want to write the screenplay, tell the director how to shoot the scenes, and cast all the characters myself because, really, who knows them better than me? Oh, and make sure all my friends have spots as extras, too.