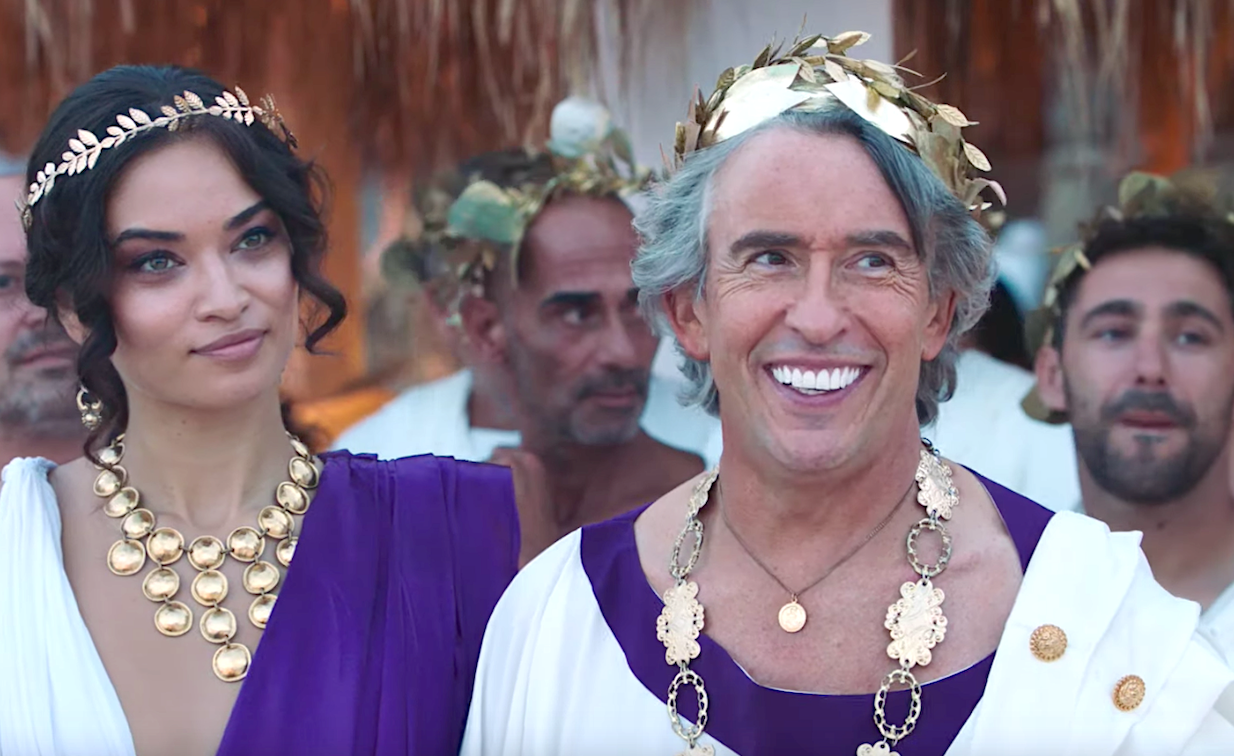 Michael Winterbottom likes to work with Steve Coogan, which is great, but unfortunately Greed is more The Look of Love than The Trip franchise, except also much, much worse.  Winterbottom isn’t afraid to experiment, which is great, but sometimes those experiments blow up in his face, and that’s exactly what we have here, a good idea in theory that simply explodes in vomitous style all over everyone involved.  It’s lucky that this movie wasn’t released very widely or seen by almost anyone, because it is bad enough to mar otherwise positive career paths and give audiences a bad taste in their collective mouths that could last into next season or beyond.  Simply put, Greed is boring, banal, and in bad taste, an overall failure from every angle that will make any lover of film cautious the next time they go to snuggle up.

It’s Sir Richard “Greedy” McCreadie’s 60th birthday, and that can only mean one thing; moronic extravagance.  The bazillionaire is known for his wild romps, where no expense is spared, and you never know which celebrity you’ll find around any given corner, but his success didn’t start out easy, he had to fight for every dollar her earned, which just fueled his desire to win no matter what, fleece whoever he can, and cash in whatever chips he has in the game before anyone can notice that there’s a crooked asshole in their midst.  Richard started his empire by buying cheap clothes, selling them for an amazing amount more than they are worth, and paying his workers nothing; now he’s the richest man in Britain, go figure.  But these evil ways will catch up with him someday; divorce, screwed up children, no friends, tax investigations, public humiliation.  Money can’t buy happiness, Sir Greedy; you’d think 60 years would be long enough to figure that out.

So I’ve enjoyed Winterbottom before, like I said he takes risks and that’s great, but my god did Greed turn into a swing & a miss fast enough to make your head spin.  Steve Coogan is the man, he’s great, but there was nothing he could do to carry this dead dog to the finish line, all he could come up with was to be as over the top as possible and hope it worked out in the end.  It did not, that’s for sure, but hey, at least they tried.  That’s the positive way to look at it; the negative way is to call this film what it obviously is; one of the worst of the entire year and one that’s bad enough to hold that position.  There were eight thousand boring storylines all wrapped up in one bad experience, and I just wished each of them would end as they were happening: the garment district, sweat shops, tax evasion, ego trips, divorces, patricide, reality TV, celebrity status, Syrian refugees.  It was all way too much, no focus was given to any one thing, and the entire movie felt like it was puked out instead of captured on film.  It was sleepy, stupid, recycled, and not funny in the least; don’t be fooled by the word ‘satire’.  David Mitchell I liked quite a bit, but I was a fan of That Mitchell and Webb Look, so that was a given, and even he couldn’t work hard enough to make anything happening around him a success.  This wasn’t really an exposé on the super-rich, it was a clunky attempt to make 100 statements at the same time, and so they all failed miserably while almost the entire cast embarrassed themselves.  Stay far, far away from this one, which shouldn’t be hard, and try to forget these talented people made something this awful.