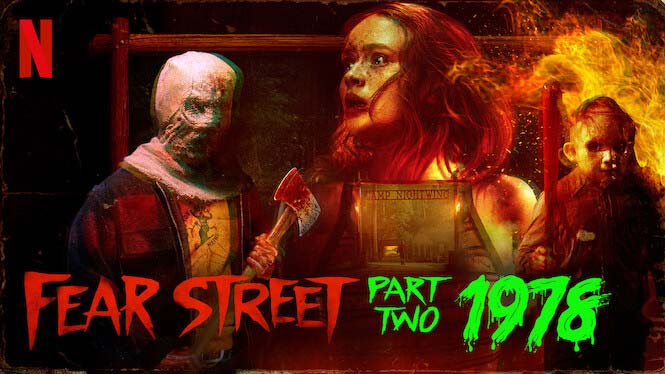 If Part One was a little like Stranger Things, Part Two took the piece of that show that I like the least and made it the star, which is far worse, and why this movie takes a step backward.  The problem is, it doesn’t have far to go before it falls off the edge completely, and I have a sinking suspicion that the third installment is going to be the worst of all.  By the way, that bad piece from Stranger Things is Sadie Sink, who I could not STAND as Max, and she’s back with a vengeance here, ready to …not act, ready to …not emote, ready to ruin another good thing with her lack of talent.  Maybe that’s harsh, but my dislike is real, and it’s nothing personal, I just get mad when people who only have one facial expression become millionaires and I’m still …not one.

The terror of Sarah the Witch continues, as Deena & Josh learn more about the curse, its origins, and what they have to do to stop the madness.  In 1978, at a summer camp where the Shadyside Mall now stands, a killer arose and wreaked his havoc, apparently just another nutjob with an ax who Shadyside turned evil.  But it’s more than that, it’s Sarah, the girl killed all those years ago, and the hate she has toward the residents of the town forever more.  Two sisters, Cindy & Ziggy, begin to understand the danger, but much too late, and the killing spree begins.  But they might be able to stop it if they can appease the Witch, to force her to relinquish her hold on their lives, and the lives of so many yet to die.

I like camp horror, I like it done pretty smutty, it’s a fun genre, and I support having hot 70s girls in short shorts, mop-topped 70s dudes in tight tshirts, shower scenes, axe murders, the whole shebang, give it to me.  But Part Two is much more Goosebumps, more Stranger Things, more being a joke instead of making a joke, and I simply didn’t like it.  There was a feeling of amateurism that I just couldn’t shake, especially when the gore started and went WAY over the top; it was like a kid pushing the boundaries without really knowing what they were doing.  It felt juvenile and that threw me off, plus the standard more-adult stuff was missing, so replacing it with extra blood might have seemed the right thing to do, but it wasn’t.  I hope the third wraps up well, but I have strong doubts in its ability.