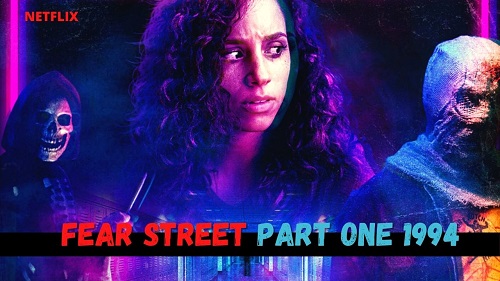 While watching, I thought of a few movies that Fear Street took from & ran away with, but it really comes down to one TV series instead, and that’s Stranger Things.  Especially when you watch the second (which I understand has no bearing on this review) and you see even more of the same actors, but it’s more than that, it’s like it was filmed to be based on/set in the same universe, and that’s weird, because, as far as I know, it’s not.  This is R.L. Stine horror, not singularly Netflix content, but it only feels like the latter, and I think that was a mistake.  Horror fans like me could like what’s going on here if it was done a bit better and a bit more originally, instead of simply capitalizing on what worked before.  I guess the result, at least in this first installment, is fine, but, I mean, couldn’t they have done better?

Hundreds of years ago, a curse was cast on the town of Shadyside, and since then nothing has gone right.  Its inhabitants seem doomed to fail, can’t get out of their own way, and lead unhappy lives, while, meanwhile, the folks in nearby Sunnyvale get all the luck.  But there’s more, and more specific; every few years a psycho seems to rise up out of nowhere, kill a bunch of townsfolk, and die themselves; it’s a weird history that people have simply gotten used to.  There’s a reason things are so shitty, though, and it goes back to a girl who was killed in 1666, a supposed witch named Sarah.  She wants revenge on the town, and she takes it by sending killers to stalk those who catch her eye; her newest targets are two girls, Deena & Samantha, and their bumbling friends.  It’s up to them to solve the riddles of the curse and to stop Sarah once & for all; that is, of course, if they can survive the night.

Maya Hawke at a mall in the beginning of the film was most definitely a Stranger Things reference, but it went further than that; it felt exactly the same.  And even when the story moved on, the mood was still 80s kids growing up, just set in the 90s instead, and still dealing with a horror that adults didn’t understand.  Another, better movie that Fear Street pulled from is It Follows, which is so much darker & more terrifying.  This film seemed to want to go gore first, second, and third, stepping away for humor & for heart at times, but always coming back to the desire to shock us to see if we’d blink.  It was almost dishonest in its scariness and scare tactics, almost rude in its insistence to push us hard into a corner.  I liked some choices, I liked some of the jokes, I liked some of the references, but I couldn’t like the film as a whole.  It’s a Cabin in the Woods nod to horror, but not with the same, laudable, excellent intent.