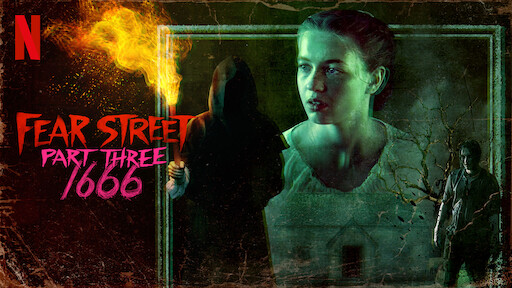 In a surprising turn of events, Part Three turns out to be the best of the trilogy, making Part One and Part Two look like major knockoffs, when this installement was just a minor one.  Well, it still did take from Stranger Things, with a big mall battle, so that was dumb, and it did steal from The Witch with a flashback chunk, so that sucked, but otherwise, yeah, it was …more original.  Hmm, doesn’t sound like it was, actually, thinking back, so I’m not sure how much credit I can give this film after all.  Regardless, it was better than its mates, and that’s something; a mostly-cool conclusion to an other mostly-forgettable franchise.

After she learned about the curse on Shadyside, and after she heard the story of the camp killer, Deena’s mind is sent back into a memory, back to 1666 when Sarah was killed for being a witch and the terror was unleashed.  Deena experiences the story firsthand, among people that she know, but it doesn’t feel strange to her, it’s like she really is Sarah and can finally learn the truth.  The legends are all wrong, something else happened in that long-ago village before it split into Shadyside & Sunnyvale, and the truth can set them all free, if they can just act on it in time.

So the story jumps back a couple hundred years to show us what really happened, to let us in on all the secrets, and I really enjoyed that, seeing it all play out.  It was a little like The Witch, a few stolen ideas there, but it was nice to wrap around the entire plot and go back to the beginning, I liked that choice, even if the execution wasn’t wholly original.  The second half of the film is back in 1994, back in “real time”, when the characters try to put their new-found knowledge to good use and end the curse on Shadyside.  But, again, it was in a mall and it was so Stranger Things; a little too much borrowing for good taste.  BUT, the story ends nicely, the mystery is resolved well, and I ended up liking this part more than the others, mostly because it was clever and well-written, not exactly because it was original and well-acted.