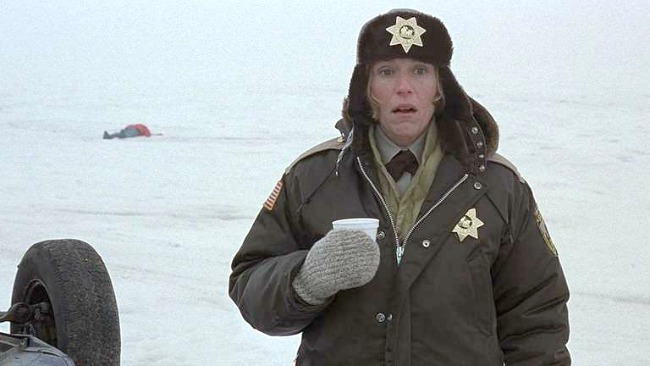 At the top of the mountain that is the filmography of the Coen Bros. genius is Fargo; dark, twisted, funny, and absolutely true.  Or, well, absolutely fictional, depending on who you believe and what you’ve read; my money is on fabrication.  But that’s OK, just by alluding to fact, by tricking us into thinking that what we’re watching is real, these amazing writers/directors have only solidified their film as one of the most immersive, impressive, and influential movies of the last 50 years.  Fargo is a masterpiece of black comedy and crime thrills, a perfect balance of idiocy and smarts that sucks audiences in and spits us out changed.  I’ve never done a Coen hierarchy, but I’m sure this jewel would be near or at the top, because it simply can’t be beat by others in the genre, and never gets old no matter how many times you experience it.

In Fargo, North Dakota in the late 80s, a series of murders rocks the peaceful, snowy area and sets the stage for a wild showdown between two bumbling criminals and one intrepid police officer.  It all starts with a fake kidnapping; Jerry Lundegaard (who isn’t too bright himself) hires two morons to kidnap his wife, with the plan being to collect the ransom money from his wealthy father-in-law and pay off some piling debts.  The kidnapping goes OK, but witnesses die along the way as the pair of criminals make their way to a lakeside hideout.  Policewoman Marge Gunderson is on the case, and she’s also pregnant, but she doesn’t let anything slow her down, including an unhelpful Mr. Lundegaard, who is in way over his head.  More people will die as the story continues, since no one knows what the hell they’re doing, and every man is fighting for his own survival, while one brave woman takes the entire case head on.

I guess my three favorite Coen Bros. films came right in a row from ’96 to 2000: Fargo, Big Lebowski, O Brother.  Beyond that, I don’t think I’d care to compare them, I love all three, and I think I’d throw Llewyn Davis in for good measure.  There’s no doubt; these men are cinematic geniuses, and their movies are American icons, going far past typical entertainment into a realm that very few are able to reach.  And with Fargo, they struck upon something special; a mix of hilarious and gruesome that somehow feels real and not campy, brutal but never over the top.  And the acting sets it apart from almost every other contemporary: McDormand, Macy, Buscemi, Peter Stormare, Harve Presnell, John Carroll Lynch.  Their voices, mannerisms, and presentations are special, there’s no other way to put it, these characters are special, and each scene & piece of dialogue feels necessary & thought out, never tossed in or shot without a singular purpose.  The entire feature feels more honed, honest, and purposeful than almost any movie ever made, and Fargo should/will (has already) go down in history as not only one of the Coens’ best but as one of the best period.