Movie Review – Everything Everywhere All at Once 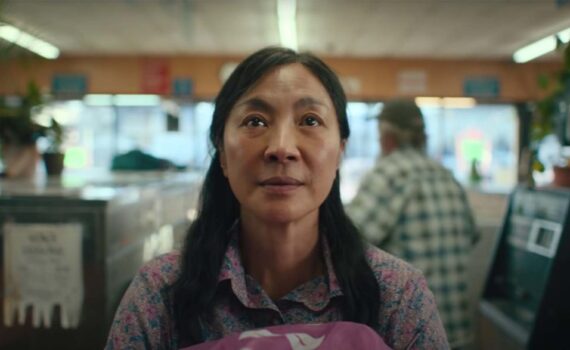 Movie Review – Everything Everywhere All at Once

Everything Everywhere All at Once is weird, until you remember that The Daniels (Dan Kwan & Daniel Scheinert) also did Swiss Army Man, it’s really their only other movie, and that one was wacko.  In a good way, in the best way, don’t get me wrong, it was in my Top 10 of 2016, but super weird all the same, and having that knowledge makes EEAAO seem all the more sane.  It’s a film that fights to show so much to us that at times we will get overwhelmed, it will seem like *too* much, but that’s part of the point.  Life is too much, there are too many possibilities, and attempting to see all the threads will cause you to snap.

Evelyn Wang owns a laundry service with her husband, having moved with him to America from China years ago to get married, open a business, and start a family far from her oppressive father.  Now the IRS is on the verge of shutting them down, her husband has divorce papers in hand, and her daughter is about to bolt from the family, after not being accepted for who she is & who she loves.  With Evelyn’s life at a crossroads, it’s about to get even stranger; her husband from another dimension comes to tell her that only she can save all the dimensions by defeating a powerful woman who is trying to bring it all crashing down.

With one of the most captivating and extraordinary beginnings I have ever seen, this film slaps audiences in the first scene and demands our attention.  Once they have it, they take us down a rabbit hole that often makes very little sense, until, ultimately, we begin to understand the metaphors behind the many lives and many failures of Evelyn Wang.  EEAAO starts perfect, goes wonky, ends on a high note, and delivers one of the most fascinating films not only of this year, but of any year, with a story that you simply can’t follow on just one watch.  It demands to be re-seen, to be taken seriously even when it’s being ridiculous (hot dog fingers), and for audiences to appreciate the talent on display here.  Yeoh, Quan, & Curtis are all phenomenal, but I *hated* Stephanie Hsu and I wish her character wasn’t even in the movie.  Take her out, edit down 30 minutes, tell the story more succinctly, and I truly believe this may have been one of the best films ever made.