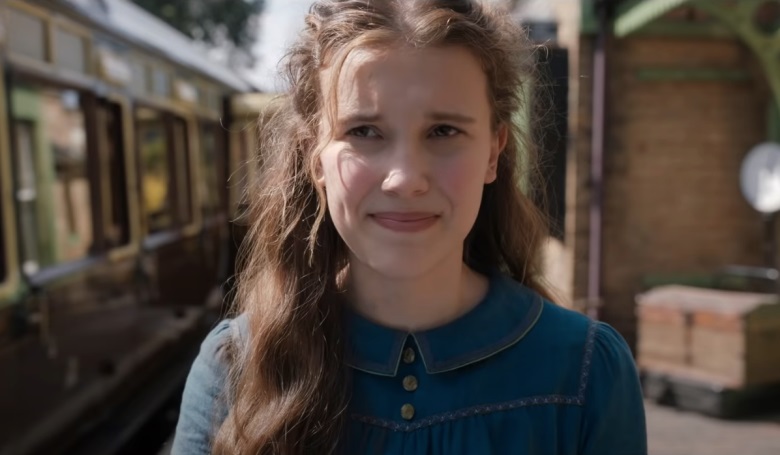 Had I known, coming in, that Enola Holmes was based on a tween novel, I would have had my daughter watch with me, I would have tried to enjoy it through her eyes, and I would have ultimately liked the movie better.  Did I miss something, or was this film not advertised at all as a kids flick, did they try to pass it off as a murder mystery/action adventure type romp, when really it’s a 12-year-old’s delight and not much more?  Again, I don’t think I would be judging so harshly had I known what to expect coming in, but cute doesn’t quite cut it when you’re playing with the pros; stay in the kiddie pool if you don’t have much more to offer than “nice”.

Enola Holmes is the younger sister of the famous Sherlock, but her family is more complicated than that.  Her father died young, her oldest brother Mycroft is in law in London and doesn’t have time for children, and so her mother raised Enola all on her own.  She raised her to be independent, thoughtful, courageous, daring, and to solve life one step at a time, which is a fun way to grow up, but not very conventional.  When her mother mysteriously disappears and her brothers come to fetch her, Enola finds her life flipping upside down.  She must escape Mycroft’s finishing school plans, Sherlock’s inquisitive mind, and the idea of “becoming a lady”, because there are mysteries to solve, dangers to be faced, and a whole future out there waiting if she’s bold enough to reach for it.

I didn’t even know this was a book series until after I watched the film, which I guess is my fault for not doing my research beforehand.  I have a daughter who is an avid reader, and she would love these books and probably this film, much more than I did anyway.  It’s rated PG-13, but I don’t see why; apart from a small bit of violence there’s nothing wrong at all, as far as I remember.  I wish they had gone one way or the other; rate is PG, have kids watch, try to solve the mystery themselves, or make it R and let adults try their hand at the clues, with content that’s suitable for us, not our kids.  As it is, this film is simply fine without any real bite; I’m assuming because it attempted to be everything to everyone at all times.  Bad idea, and I think bad casting too: Millie Bobby Brown is not really any good, Helena Bonham Carter has used up her 15 minutes, and Louis Partridge was very weak.  I didn’t mind Henry Cavill or Sam Claflin, but their parts were small, and basically unneeded; use them more or don’t use them at all, we see through the use of their names to get us interested in a film we may not have noticed otherwise.  I’ll come back and watch this again some day with my daughter, and perhaps that will help to change my opinion of Enola Holmes, a movie that’s cute and maybe even clever, but directed by a first-timer and not strong enough to really stand out.